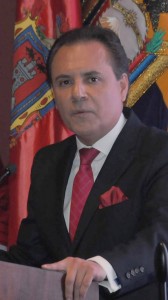 During the speech for the second anniversary of the Superintendency of Communication (Supercom), its head, Carlos Ochoa, said that the coming year is full of challenges, proposals and, above all, ‘reforms.’

He said that the reforms he will pose to the Communications Law would be focused on “seeking a consensus on this standard ans the reality.”

The superintendent said they have realized that certain media “violate the rule” knowing that the only thing that can be done is a wake-up call.

In addition, the Superintendency believes that cases like the “media lynching” must have a sanction to match that of the damage caused.

Another issue would be to reform the implementation of the ‘mediation,’ so that prior to any formalized process they can reach an agreement between the media and the affected; so there would be no intervention of the Superintendency.

The Higher Education Act, sent to revision at the request of students