Supercom will submit specific sanctions to the Communications Law reforms 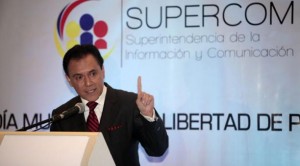 Posing specific penalties for the media will be the aim of the reforms to the Communications Law, which will be submitted by the Supercom.

The proposal was expected to be delivered in October, but now the Superintendent of Communication Carlos Ochoa prefers not to give dates. On November 20, he explained that they continue working on the text, which will be discussed with the actors of the communications system, the executive and legislative powers.

Ochoa exemplified that a media can contain up to twenty calls of attention without preventing recidivism. “The law was made to be respected,but if a media deliberately violates the law every day, it should exist the progressivity possibility” in the application of sanctions, “rather than strong, targeted sanctions,” he said.

“Enough of being laughed at a person’s sexual preference, skin color, that’s not comedy, it is a violation of their rights, and that is happening inthe programs, in quotation marks, comic, which used cheap humor, when laughing at each other. This is a long process that began with these programs, but the in a future will generate a better TV programming,” he said.