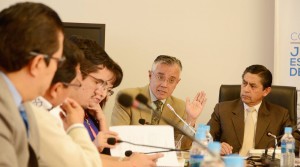 The Superintendent of Banks, Pedro Solines, said they are studying the possibility of allowing the unemployment funds to return 100% of the resources to whoever claims it.

Since last year, only a 50% refund is allowed and the rest is for the time of retirement.

“If everyone withdraws their money at the same time they would have to receive vehicles parts, buildings or land titles”, he said explaining that the funds do not have the money in cash but distributed in investments.

A refund of 100% of the money to shareholders upon request, is a condition raised by the government.

The Assembly has already approved the amendments to the Social Security laws and the Bank of the Ecuadorian Institute of Social Security (Biess), making 54 unemployment funds to be administrated by the Biess.