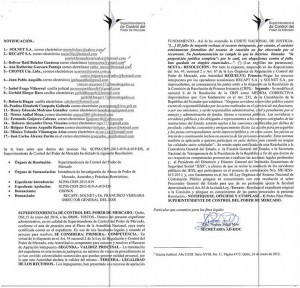 The resolution, issued last Friday, rejected the appeal filed by the company regarding the penalty imposed by the Commission of First Instance of that Superintendency, in September last year.

According to the Commission, Recapt “falsified and distorted” the competition during the selection stage of the contractor. It stated that the company had an agreement with the Guayaquil company Solnet SA, to submit its bids and benefit from the contract. The Superintendency also fined Solnet with $ 9,874.

Mourning in Manabi by murder of migrants in Venezuela