Surveys on indefinite reelection would have been ill-conceived, according to Assemblyman Cassinelli 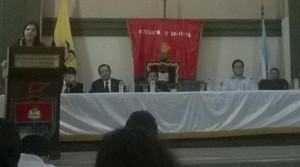 The Casual Commission dealing with the application of Constitutional Amendment was presented yesterday at the Faculty of Law at the University of Guayaquil, to socialize the proposed 16 changes to the constitution.

Juan Carlos Cassinelli, head of the Commission, described the socialization held by some Assemblymen as “transcendental,” adding that there is “misinterpretation” of various groups about the aspect of indefinite reelection.

About the surveys the opposition leader Guillermo Lasso has spoken in recent days, and that have indicated that 70% of Ecuadorians would be against indefinite reelection, Cassinelli questioned the way this was raised to the citizenship, according to the Assemblyman, generating distortion.

Persecution of dissidents of the Maduro government will continue, according to Leopoldo López