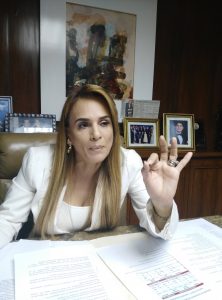 In an interview with Daily El Universo, Sylka Sanchez, who leads the list of assembly members for the Adelante Ecuatoriano Adelante (AEA) party, said they hope to capture at least 20 seats in the National Assembly.

Among their proposals there is a constitutional amendment based on Section 442 of the Constitution, “we want that the functions of all the authorities elected by the Citizen Participation Council cease. This body is not impartial; it has been questioned. And we are also looking for a reform of the country’s institutions,” she said.

Sanchez states that the government will not have a majority in the Assembly: in this way they can make reforms with the support of the third part of the assembly. “The opposition agrees to process this project in two debates within 90 days; Or with a referendum.

In the legislative aspect, they propose a reform to the Criminal Integral Organic Code to repeal the table of consumption of narcotic and psychotropic substances “that has legalized drugs in the country. It is a direct attack on the family structure. All schools are invaded by micro-traffic, and since young people do not have the opportunity to study at university and there is no work, this is a breeding ground for crime,” she added. We will also reform the Law of Higher Education, Social Security, and others.