Sylka Sánchez, spokesperson for Álvaro Noboa , went to the General Prosecutor’s Office in Quito on the morning of this January 19, 2021 , to give the version of the facts, within the investigation initiated after a complaint that she filed against Diana Atamaint, Enrique Pita, José Cabrera and Luis Verdesoto. 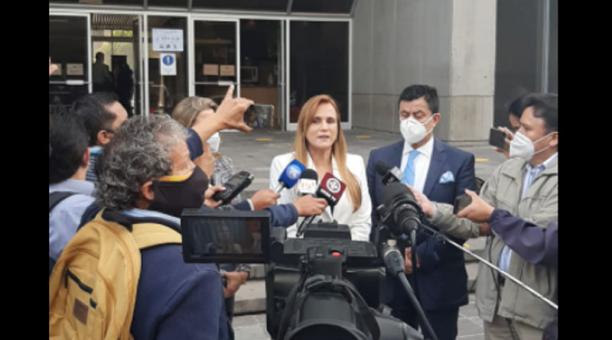 Sánchez filed the complaint on November 25, against the four members of the National Electoral Council (CNE ), for the crime of alleged contempt of the sentence of the Contentious Electoral Tribunal (TCE) that decided to accept a subjective contentious electoral appeal of Justice Social and ratify its legal status.

For the movement, the CNE did not comply with that sentence and prevented the registration of businessman Noboa as a candidate for the Presidency of the Republic.

“It has been proven that the electoral offense has been committed , that the 4 members must be definitively dismissed and the alternate councilors who take office have to attack the ruling of the TCE, there is no legal form for them to remove Álvaro Noboa from the ballot electoral as they are trying to do, ”said Sánchez.

He added that they will insist with civil, national and international criminal complaints “so that it is clear that here it must be respected and that Ecuador is a country of law.”

Also, outside the Prosecutor’s Office, the Social Justice lawyer, Geraldine Martín Arellano, argued that it is important to highlight that Noboa wants to participate in this electoral contest to respond to the needs of Ecuador , which is a country that respects the law.

“If we give up at this time we are not worthy of the popular will, we will continue in the fight until the last legal consequences, because the law assists us, none of you would renounce any of your rights due to corruption .”