Tame restricts the sale of tickets in and out of Venezuela 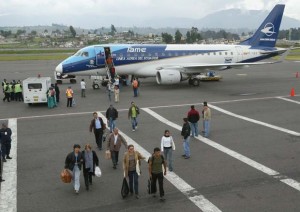 The Ecuadorian airline Tame limited the sale of its ait tickets with destination to and from Venezuela.

The head of the company, Fernando Guerrero, said that the state company has sold tickets just for November and December “until the debt is settled with the Venezuelan government”.

He explained that the measure is a way to safeguard the company’s revenues. “So we take care because in case we decided not to fly to Venezuela we would have to make refunds and compensations to passengers. So we opened the ticket sales every two months”.

The airline is waiting for the cancellation of a debt of approximately $ 20 million, related to operations in July, August and September this of year. Earlier this year, the debt stood at $ 45 million, which has already been canceled.

Pending money with Tame is part of a debt that the Venezuelan government has with airlines from different countries.

Since 2003 in Venezuela a strict control of currency exchange is in force. Under this framework, international airlines sell their airfares in bolivares and the government has to change its earning to dollars.