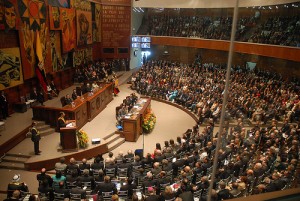 The Government will send to the assembly a tax reform bill related to cigarette, alcohol and sweetened drinks consumption as an economic emergency. This was stated yesterday at the Carondelet Palace, by Alexis Mera, legal secretary of the presidency.

The announcement to “pay a little more” for those products was made by President Rafael Correa last Friday. The government would seek to raise revenues by $ 300 million.

Mera said that this week they will review the document. “The concepts have been approved, and we met with all the technical teams and the president and hopefully it is ready this week, this week I expect to see the texts with the rest of the government officials, hopefully until Good Friday we are ready … ” he added.