Taxi drivers are trained in tourism by arrival of Pope Francis 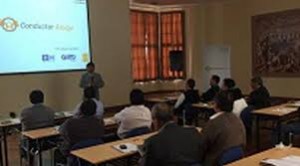 Taxi drivers of Quito prepare to welcome tourists who will come to the city for events such as the visit of Pope Francis. A group of 19 drivers, members of the Julio Jaramillo cooperative, were part of the first class of taxi drivers.

This was a pilot phase, called ‘Driver Friend.´ According to what Quito Tourism reported, between 8 and June 11 attendees received about 16 hours of training.

The new phase is scheduled from 22 to 25 June and from June 29 to July 2. The initial aim is to count on 58 trained drivers.

The following talks will be held in the Eugenio Espejo Convention Center. These seminars are conducted in the context of an inter-institutional cooperation agreement signed between Quito Tourismo, GM OBB of Ecuador and Capacitur.