Technology detects the points of greatest agglomeration in Quito

A great scarlet stain extends from the Historic Center of Quito towards Quitumbe . It is a heat map that identifies the crowds in the city. 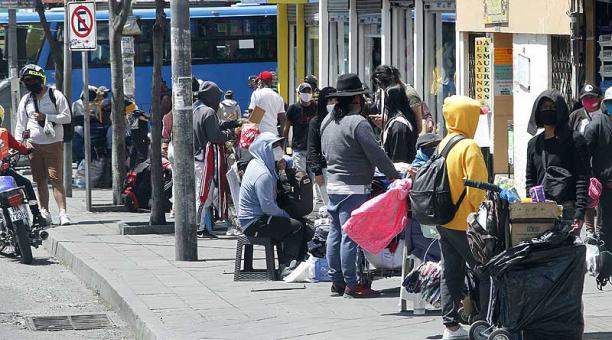 Technology detects the points of greatest agglomeration in Quito

The red dots that are in the urban area contrast with the green ones, which indicate less crowding and that are still visible in the rural parishes of the District.

The technological tool , which is updated daily, belongs to the ECU-911. Users can review information from any city. In Quito, the most conflictive points are in Calderón, Carapungo, San Carlos, Centro Histórico, La Atahualpa, Chillogallo, Solanda and La Ecuatoriana.

The director of the ECU-911, Juan Zapata, points out that since the start of the health emergency due to covid-19, 33,704 alerts have been registered due to agglomerations nationwide; 18.4% of them belong to Quito, which occupies the first place.

How does the heat map work?

The ECU-911 cameras detect concentrations of more than 40 people in markets, squares, avenues and streets and issue an alert. The ECU-911 operator captures and fills the data into an array. The figures feed the digital map , through formulas.

The most conflictive sites are those close to supply centers , where 500 alerts were generated. On 12 occasions there were riots. An example is the San Roque sector . Despite the fact that the market is closed, yesterday, June 11, 2020, a large number of merchants and buyers were seen. Many did not comply with the 2 meter distance or did not wear masks.

From Monday, June 15, Zapata announced, the Artificial Intelligence Platform for Social Distance will work. This software will detect the accumulations and the operators will emit messages by the speakers of the video surveillance systems, so that people take distance. Similar messages were used for simulations of tsunami in the coastal axis, or of volcanic eruptions in Pichincha and Cotopaxi.

The Municipality also manages its own tools. According to César Díaz, Secretary of Security of the Cabildo, evaluations of the growth of the contagion curve are made daily . The Metropolitan Observatory of Citizen Security is in charge of analyzing the information that the national and provincial COEs deliver to the Metropolitan.

With the data of cases by parishes a database for the heat map is fed. Thus, it is possible to know in which parishes the contagions accelerate or decelerate .

Díaz points out that the Municipality receives information, but has not been able to directly access the technological tool that the Ministry of Telecommunications (Mintel) has on the mobility of people diagnosed with covid-19.

For this reason, last week the Quito COE urged to merge this tool with those of the Cabildo, to improve collaboration and control. At the moment, the heat map only records the address of the infected.

The Municipality has a tracking model for epidemiological surveillance , explains Gregorio Montalvo, director of Health Policy and Planning. This mechanism condenses various data, such as the number of positive cases , the number of calls to 171 and 911, case fatality rates, etc., which are used to make decisions such as the change in the traffic light .

They are also a guide to organize the taking of tests in vulnerable sectors . For the moment, Montalvo said, there is a sustained growth in contagion in the city and on June 17 an evaluation will be made of the impact of the change of traffic lights on the curve.

Yesterday, June 11, it was reported that in Quito 54 people were waiting for a bed because they suffered from covid-19 and another 34 required intensive care, which indicates that the demand has exceeded the capacity of the public health system, he pointed out.

The most scandalous price premium is in “Los Ceibos” hospital