Tense environment in Galapagos by Bill of Special Regime 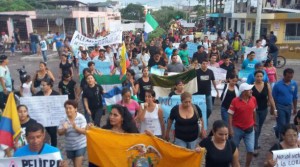 In the Insular Region aspire to modify what they consider controversial articles of the veto of the Executive to the Bill of Special regime of Galapagos.

The cost of living in Galapagos is more enormous, even since eight months ago when three boats sank and only one is supplying food. A month ago the onion came to cost USD 1.75 pound. Here is kept double salary in public and private institutions that somewhat compensates for the cost of living most yet to be 1 000 km from the Mainland. The only way of mobility is the aircraft at a cost of us $ 200 but if we dont reach 15 quotas designated in each airline then we have to pay USD 360 “, said the Mayor of Santa Cruz, Leopoldo Bucheli.
He also explained that although between Tuesday 2 and Wednesday 3 June 2015 began sit-ins and protest marches, 4 June 2015 also felt tense among the inhabitants of Santa Cruz Island but there were no demonstrations. But protests are not discarded for the next few days. “For people is very worrying what is going on.
The new law also concerned the issue of insularity to municipalities that recognized the Government of Rafael Correa. It means to receive double the values allocated in the State budget. In the case of Santa Cruz have a regular allocation of USD 2.2 million doubled to USD 4.4 billion.
These resources of insularity recently started it to receive some 4 years ago with the Government of President Correa”, he added. Today the project of the Executive of reform this formula and indicates that budgetary allocations will be paid with an increase that will be calculated by multiplying the annual price index (IPC) consumers with respect to prices of continental Ecuador, which will be deducted from the global amount delivered.