Terrabienes manager spoke out to questionings of fisca and affected 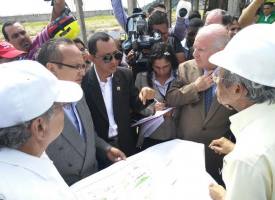 Jorge Ortega Trujillo, general manager of Terrabienes, dispelled this March 3 the rumors and fears of those affected by the real estate company, who feared theflight abroad of those responsible of the company. He showed his face to prosecutor Walter Suárez and before about twenty homebuyers and answered the questionings of the authority.

He explained where, according to the first projects, would be built the bridge across the Daule River, which would affect the real estate development of the stagesof the Arcos del Río housing project and what prompted the voluntary cessation of work.

Prosecutor Suárez also made a recognition of the area where the real estate company Terrabienes should have built the macro project Arcos del Rio, located at km 1.6 of the Terminal Terrestre highway, in Guayaquil. This is part of the process requested by the Prosecution to investigate an alleged crime of fraud by theOrtega Trujillo group, to more than 1,200 customers who did not receive their homes in the specified time in the contract.

During the tour, the mere presence of Ortega exacerbated some victims who did not hesitate to say to him what they had reserved for months: “I’ve paid $ 40,000 Ortega, where’s my money!,” “We trusted you, where are your 40 years of experience?.” “Sell the project to someone who can build it!.”

Quishpe: we asked the president to stop violating of the Constitution