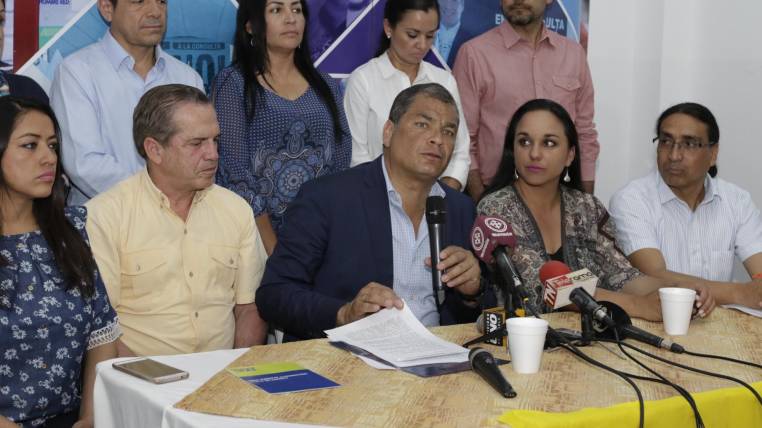 Becoming a minister or presiding over a state institution implies access to an economic remuneration above the average that is as stable as the time you are in office. The declaration of the Income of the majority of ex-employees appointed during the regime of Rafael Correa serves as a reflection of this maxim.

The economic situation improved (since its payment in Income Tax grew), after accessing a position of responsibility, for characters that acquired notoriety in the last decade, according to the information published and accessible to the whole world of the page Internal Revenue Service website.

This is the case with the former president Rafael Correa, with his vice president Jorge Glas, with his faithful allies Marcela Aguiñaga and Gabriela Rivadeneira, with their image strategists Fernando and Vinicio Alvarado and with Ricardo Patiño, Juan Pablo Pozo, Patricio Rivera, Rommy Vallejo, Richard Espinosa, Gustavo Jalkh …

All of them, from a list of names selected for their outstanding role in the previous administration, have caused in recent years an amount of Income Tax higher than that settled in 2006 or 2007. But there are also exceptions. Carlos Pólit, Freddy Ehlers, Alexis Mera or Galo Chiriboga, among others, declared more Income before reaching the Government or to higher positions than later.

However, there are a few cases of former high-ranking officials who pay more than $ 10,000 of income. In 2017, only four of the authorities exceeded that amount: Vinicio Alvarado (who has paid the most taxes in the last three years), Alexis Mera (the second in the taxpayer ranking), Fernando Alvarado and María de los Ángeles Duarte .

There are also ex authorities that have not submitted their statements every year. This is the case of Camilo Samán, Gustavo Larrea, Alecksey Mosquera and Walter Solís. These two last ones have been sprinkled by the corruption: Mosquera was condemned to five years of prison by money laundering and Solís is fugitive and faces a process by embezzlement.

On the other hand, former Vice President Jorge Glas, dismissed from his post this year and in prison for illicit association in the Odebrecht case, has complied with the filing of his tax return every year since 2002. (I)

Directory of the FEF approved the Ecuador Cup