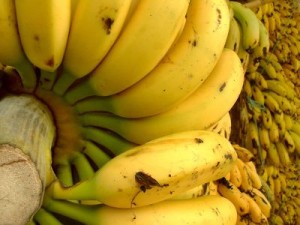 Last Thursday, Ramón Espinel, Minister of Agriculture, Livestock, Fisheries and Aquaculture; decided that the price of a 41.5-pound banana crate, would be set at $ 5.50 for 2011 (10 cents more than the prior price).

The Agriculture Ministry is responsible for setting the price as the Advisory Council, comprising three representatives from the productive sector and three from the export sector, failed to reach an agreement on January 6, when they held a meeting in Guayaquil.

Exporters normally sell 43-pound crate, in this case, they must pay the difference (11 cents), which would give a final price of $ 5.61 to the crate of fruit, said Paul Gonzalez, president of the Cantonal Agricultural Center.

Producers have issued complaints, claiming that they will have disadvantage in the payment of the product, because the official price does not cover the cost of fruit production.

Raul Lara, president of Banana Producers in El Oro, explained sector workers had asked the price to be set at $ 5.80, he added the industry is dissatisfied with the new price.

State of Calamity Has Been Declared in Brazil