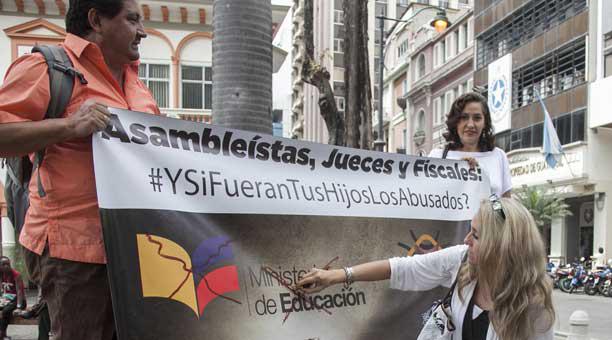 Yesterday (November 21, 2017), a group of parents made a protest to reject the sexual abuse of children in Guayaquil. The aggressor raped ten girls in two schools and in both cases the solution was to change him to another the school.

In exchange for relocating the teacher, the parents and representatives on the children were forced to sign a commitment document, in which they desisted from taking their daughters to a medical examination. That way, they would not have the proof that would show and determine the damages caused by the violation and they could not have recurred to a psychologist.

This complaint by the relatives of the victims against the personnel of the Educational District and the Department of Student Counseling was included in the report of the Aampetra Specialized Commission of the Assembly. These violations occurred in two schools of Chimborazo, and after lamenting the fact, the rapist was arrested.

This is one of the 30 cases that the members of the Commission have analyzed and in which there are more than 420 victims. This entity has more cases delivered by the Prosecutor, Judiciary and Minister of Education.

In the case of a school in Santo Domingo, a teacher sexually abused 14 girls, physically and psychologically abused 18 more. The District acknowledged the incident and the teacher was dismissed, but the Prosecutor’s Office was not notified to continue the criminal procedures. The school director did not collaborate.

There are three individual complaints in the Office of the Prosecutor and one of them was closed, but due to the pressure the case was reopened and is still pending. The report does not detail the current situation of the aggressor. But after the complaints of the parents, it was known that the suspect ran away. 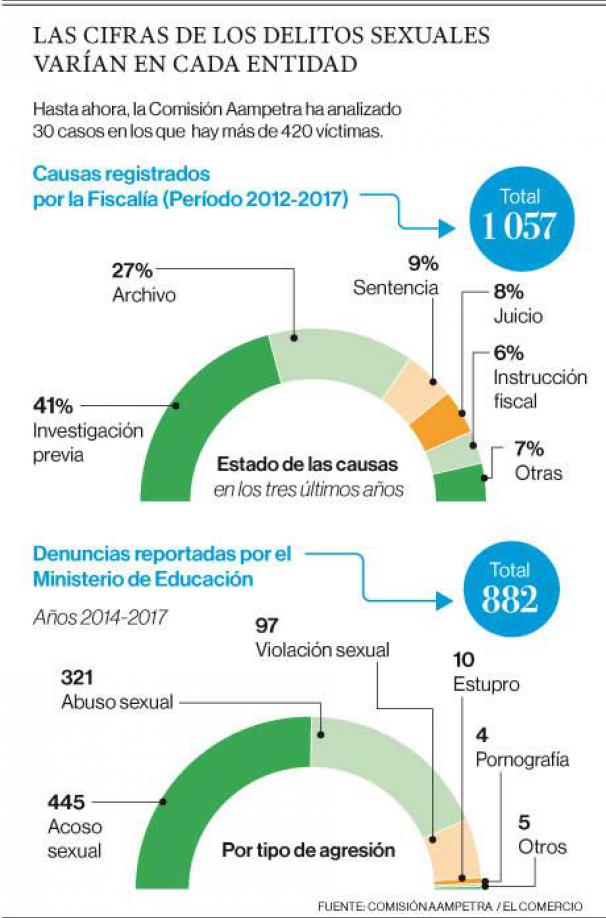 In a school in the north of Quito there is a case of sexual harassment, in which the teacher was suspended and sanctioned with 10% of his salary, but the Criminal Guarantees Court of Quito declared him innocent.

In two educational centers, the number of victims is alarming: In an establishment in the south of Quito there were 41 children and in another one of Calderón, north of the capital, they added 84.The first case has been the most emblematic and was the reason why this scandal was uncovered.

The Commission says that the Ministry of Education did not carry out administrative sanctions against the teacher or against the entity, between 2011 and 2016. Only one fine was generated for one of the two open investigative processes, which was charged five years later.Although the victims suffered rape, the Office of the Prosecutor first accused the attacker of indecent assault, a misdemeanor. At the next trial, he was charged with rape and sentenced to 16 years in prison.  That cause was given by the aggression to one of the victims. In this case, relatives asked for a change of prosecutors and reported disappearance of evidence.

In the second school, the report only specifies that the teacher was transferred within the District, to fulfill administrative activities, and the Ministry intervened.In May 2017, the complaint was filed with the Prosecutor’s Office and is still under investigation. According to the entity, it is a pedophile.

After sexual abuse against five children in a school in Guayaquil, there are three detainees and a fugitive. The Ministry recognized that there was omission and negligence on the part of the school authorities and the Educational District. The authorities of the institution were removed and the entity was intervened. The abuse was extended to a child development center, where the victim is barely four years old. The aggressor escaped.

The students of a ballet academy denounced to the Commission that their instructor, for years, systematically and permanently harassed them sexually and violated one, the complaint was filed.The instructor continues to give ballet classes independently and a new complaint was filed with the Office of the Prosecutor.

In this case, the Commission clarifies that this type of entity has no control. Aampetra’s report also shows the lack of coordination among the entities involved, and this is reflected in the statistics of each one. According to the Office of the Prosecutor, in six years (2012-2017) there were 1,057 complaints. However, the Judiciary handles a higher figure (4 864), in just the last three years. Of those, 2 264 were judicialized. At the level of the Ministry of Education, complaints of assaults against minors totaled 882, between 2014 and 2017.

However, in the first appearance requested by the Commission from the current Minister of Education, Fander Falconí, explained that the number of cases increased to 919, and this only corresponds to the public sector.

Two former Education Ministers also appeared: Augusto Espinosa and Freddy Peñafiel. The first one was in charge of the Ministry between May 2013 and November 2016. In his intervention, he pointed out that abuses are not the heritage of the educational system, but that most of them occur in homes.

He admitted to the Commission that he knew what was going on, because a year later 100 complaints were filed within the Prosecutor’s Office. Yesterday, Espinosa reiterated to this newspaper that due to these denunciations in his administration there were audits to the institutions and sanctions to the personnel. In addition, he detailed three actions: a registration and monitoring system; a process of rigorous access to teaching with psychometric tests and constitution of conflict resolution boards.

Peñafiel replaced Espinosa until May 2017 and in his appearance at the Assembly he said that he participated in hiring clinical and educational psychologists and social workers. (I)