The Achievements and Challenges of Fundación Nuevo Mundo. 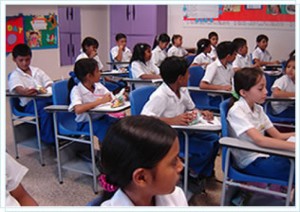 “During the last couple of years, the Foundation is definitely facing the biggest challenge in our history” says Dr. Patricia McTeague, President of Fundación Nuevo Mundo (New World Foundation). “The satisfactions, however, have been completely positive during these 27 years. To see the kids overcome adversity and to watch some of them even started their own companies; you can definitely tell a lot of them have a completely different level of life.”

And, precisely, the history of this Foundation verifies McTeague’s words. For more than 27 years, Fundación Nuevo Mundo uses the same buildings, services, classrooms, soccer fields, and teachers that the students of the main highschool, Unidad Educativa Bilingüe Nuevo Mundo, one of the most recognized schools of Guayaquil, also use. More than 600 children and teenagers receive quality education in the facilities of this highschool. In addition, medical and psychological assistance is provided to students of the Foundation, as well as a lunch made for their nutrition on their breaks from classes. The Foundation has the commitment and dedication of more than 60 parents of the students of the main highschool who, mostly in the mornings work as full-time volunteers. They make annual public collections on the streets and several other public places in order to raise funds for the Foundation. In addition, they organize events and other activities to help the good cause. “They are the Partners of the Foundation” says McTeague.

Dr. Patricia McTeague’s face illuminates when she remembers with affection the fulfilling experiences she’s had during her career along with Mrs. Celeste Blacio de Rendón and Dr. Sonya Rendón as managers of one of the most important Foundations to contribute in Education for more than 27 years. The institution focuses on helping kids from Durán (a small city 10 minutes from Guayaquil), and has a medical clinic and 2 daycare houses for working mothers in Durán. “In the beginning, we only had other mothers working at the daycare, most of them did not have a degree. Therefore, we’ve make sure, little by little, to send them all to college, and now most of them are Professionals”, explains McTeague. For several years, the Foundation also provided outstanding students with scholarships to study in other countries like the United States.

“One of my students of the Foundation went to the United States with an scholarship given by the Foundation. He went to college there, graduated and returned to Ecuador with a certification to calibrate x-ray machines. Turns out there are very few people in Ecuador with certificates to do this work, and he has now started his own company and travels around the country as a very succesful businesman.” affirms Dr. McTeague, who also adds it’s “impressive” and “joyous” to be able to see the results of a dream she, along with Dr. Sonya Rendòn and Mrs. Celeste Blacio de Rendòn started to build more than 27 years ago on Mrs. Blacio de Rendón’s house.

In the 80s, McTeague and Rendón had been teachers for some time in Ecuador. “The majority of the population of Ecuador did not have access to a good religious education” says McTeague. “Our first idea, before we thought of the main highschool in the morning, was indeed to have a school for kids who did not have any other choice” comments the President of the Foundation, and adds they realized at that moment they did not have enough resources to fulfill their dream. “We had $4,000 and we started to buy desks and little benches and put up boards and knock down walls on Granny Celeste’s house (as most people referred to Mrs. Celeste Blacio de Rendòn), but we spent all of the $4,000 and we realized we couldn’t build a school like the one we wanted without any other support. Therefore, we decided to do it the opposite way, by creating a great school people couldn’t resist. With good English teaching, good education and religious and values teachings. With the income of this new school, we would try to do something for the ones who could not afford quality education”. 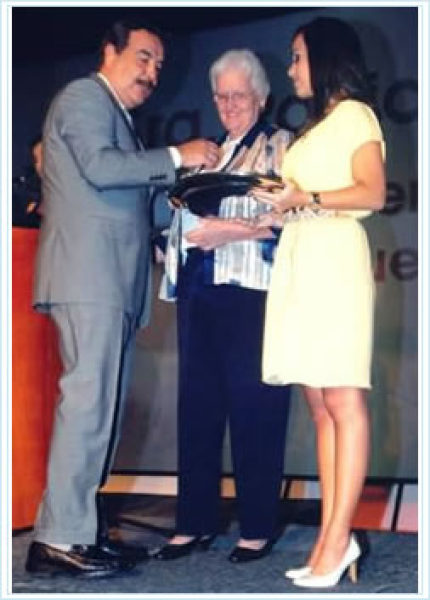 In 2009, Dr. Patricia McTeague (center) President of Fundaciòn Nuevo Mundo, received an Award for 25 years of the Foundation.

Unfortunately, there are people who doubt of the work they make. “They have the Foundation so they don’t have to pay taxes” quotes with sadness Dr. McTeague, referring to a phrase she once heard someone else had said regarding their labor on the Foundation. “The main highschool, Nuevo Mundo S.A. is a company, which does pay taxes normally like any other company, and, Fundaciòn Nuevo Mundo, on the other hand, is another company, which is indeed free of taxes because of the labor we make” clarifies McTeague. “Apparently, some people do create companies as Foundations to avoid paying their taxes and give us a bad reputation to those of us who do want to bring help with a Foundation”, she says.

Due to many economic issues McTeague qualifies as “crisis”, the Foundation has been forced to close the three last years of Highschool. “With a lot of sadness I had close these three courses, because I’m not going to give the kids an education that lacks of quality, which does not provide them with the opportunities they need, that was never the idea” comments Dr. McTeague. “There used to be groups in the United States or local companies that helped us. Some of them still do, but a lot less frequently. I believe the crisis has affected the whole world” says McTeague. “That’s why we’ve been forced to reduce the help we give a little bit, and try to do the best we can with what we have and not try to cover what’s impossible to cover or maybe do it with lack of quality” she adds. However, for the Top 10 students of the Third Course, which is currently the last course in the Foundation, an scholarship is given so they can study in the morning at the main highschool. “It’s a challenge for most of them in many areas, but we’ve had very positive results giving these scholarships. With a lot of dedication, the kids have proved to be very capable of keeping up with the level of education of the main highschool”, says Dr. McTeague.

“Unfortunately, the donations we have at the moment are not constant and are not the same amount from what they used to be” she adds. “We have a 60% deficit of the needs of the Foundation, which we’re looking for on the outside”.

“It is not possible to have a main highschool on the morning without thinking about the help of the school in the afternoon, in the Foundation” says McTeague. “It doesn’t take a communist, revolutionarist, or to bring somebody down to put some other up, or even being a politician, that’s not the idea. It’s all about choices” she affirms and says “it doesn’t have to do with religion either. I think we’ve come to this world to try to make this a better place. There are people who live their lives frightened of what is going to be taken away from them, and that is not the way either. It’s all about creating environments of multiple success. It would be a tragedy if the Foundation ends”.

Patricia McTeague says that it’s been a policy of the Foundation to stay in low profile, because she used to think there’s no need to be telling everyone how they’re helping others. However, she recognizes that nowadays, it is imperative that more people get to know about the activities they do, so they can continue with the help they give to families in Duràn. Therefore, little by little, former students of the main highschool are cooperating and calling their former classmates to organize and try to do something to help the Foundation.

“All of us have something we can give. All of us. There’s an old song that goes like this: ‘Love’s not love ’till you give it all away.’ I believe love was not placed in our hearts to keep it to ourselves. I think that giving out to the Foundation, in whatever, hours of work, possessions, money, or any other help you can provide, is a way of sharing this love we need to have for others, who, accidentally, do not have the same opportunities we have been blessed to have”. concludes Dr. Patricia McTeague.

For more information on the labor Fundación Nuevo Mundo does, please visit their official website by clicking here.

Robert F. Kennedy Jr., The Advocate of the Environment