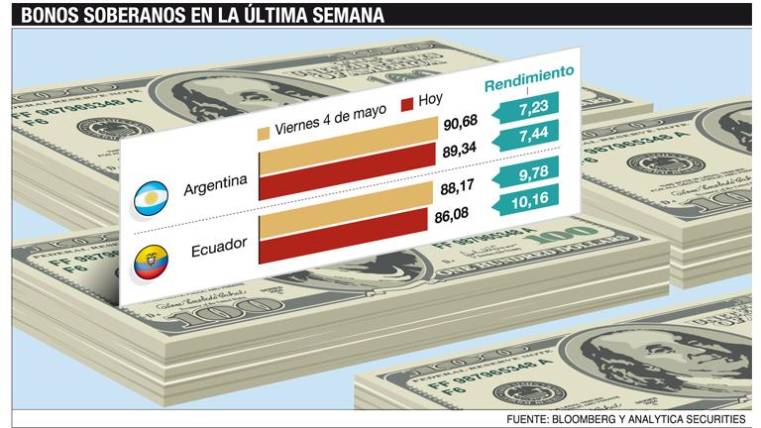 Argentina is having a bad time. This week, the government of Mauricio Macri began talks with the International Monetary Fund (IMF) to request a loan in order to prevent an economic crisis in the face of the deep devaluation of the peso against the dollar in recent days.

The Argentine problem has affected the risk perception of emerging countries, especially those with higher risk that have a credit rating known in international markets as ‘single B’ including Argentina and Ecuador.

“This is not only affecting Argentine bonds, but also Ecuadorians, how much? That is difficult to determine, “says Santiago Mosquera, a professor at the USFQ Business School.

Argentina, being an important issuer of the ‘single B’, has affected all that category to which Ecuador also belongs, which means an increase in interest rates due to the higher risk

For the economic analyst José Orellana, the situation in Argentina may have affected Ecuador’s bonds somewhat. However, he believes that the increase in interest rates on paper and the increase in country risk are due to Ecuador’s internal issues.

The increase in Ecuador’s country risk this week, says Orellana, has been greater than that of Argentina, despite its devaluation of the peso

The situation of devaluation does not only happen in Argentina. The currencies of emerging economies (Latin America, Russia, some African countries, among others) have been devalued in recent days against a dollar that has strengthened.

On April 23, the performance of the US Treasury bond  exceeded 3% annually for the first time since December 2013.

The appreciation of the dollar responds to a very good expected data of inflation in the United States that increasingly shows a stable approach to the goal of 2%. In addition, the labor market of that country is practically in full employment and the level of activity does not present risks.

But what does the current appreciation of the dollar and the devaluation of the other currencies mean for Ecuador?

Being a dollarized economy, one of the main effects, explains Augusto de la Torre, economist, head of the World Bank for Latin America, is the loss of competitiveness for the country as it becomes more expensive in the face of competition from neighboring countries.

“The cost of labor in Ecuador, a teacher, a policeman, etc., is more expensive in Ecuador. This discourages investment, the generation of employment and favors imports, “says De la Torre.

Mosquera says that we still have to wait for how long the appreciation of the dollar and its effect on the other currencies will last.

Argentina and the IMF

Credit: Argentina asked the IMF for a “high-access” stand-by credit for an undisclosed amount and the agency’s response could take up to six weeks.

Amount: The amount of the loan that Argentina has requested from the IMF was not disclosed, but it is estimated that it will be around $ 30,000 million, according to information from the specialized press.

Deficit: Among the requests made by the IMF when granting a stand-by credit is the reduction of the fiscal deficit by the requesting countries. (I)

Term to supervise the ex-officials of the correismo is finished