The Armed Forces could intervene in the internal security of the country, according to reform 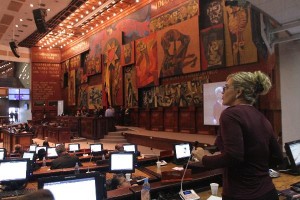 The amendment to the Law on Public Security and the State was approved yesterday by 80 members in the full Assembly against 23 votes. On it  the Armed Forces  intercession  is authorized over the internal security of the country.

The bill was introduced in 2010 by President Rafael Correa, had its first report in 2011 and, after three years was approved by the Assembly Alianza Pais (PA) and its allies.

The first part of unrecorded article notes that the military support may be complementary to the work of Police safeguard the internal protection, maintenance and control of public order and security.

The opposition assembly member Cynthia Vitéri from Partido Social Cristiano (PSC) and Andrés Páez  from Creo were against the bill ensuring that what they wanted was to approve the Sarayacu military intervention. “I want to see how this law  is released in the Sarayacu village ” Vitéri said. “This should be called the Jiménez (Cléver) Law,” Páez said.

But the ruling denied those assertions. Ricardo Zambrano said: “We can not afford to have a military institution only for defense and external attacks.”

The Finance Premier will allocate the necessary resources for the equipment, training and employment of the Armed Forces to protect public safety, based on the Joint Armed Forces Command design project , and the Secretary of Defense will report to the Assembly on the implementation of complementary operations in Police support.