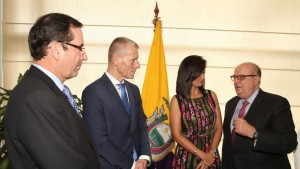 Two MEPs arrived in Ecuador to gather criteria in relation to the possible approval of the trade agreement with the European Union.

In the Assembly, Fisas said that the agreement “will diversify the Ecuadorian industry so it does not depend so much on oil and will allow to make a greater promotion of the manufacturing industry,” according to a statement of the legislature.

And he added, according to the version of the Assembly, that this instrument beyond the exchange of goods “allows for collaboration between the European Union and Ecuador.”