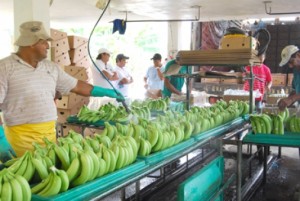 The Government accepted the recommendation of the technical board (producers and exporters), that had suggested to reduce the value of the 43 pounds box of bananas to $ 6.16.

Before the crisis of the international market, in which prices fell after the increased production in Central America and the reduction of consumption in Russia, the authorities took the decision.

In October of this year, according to statistics from the Association of Banana Exporters (AEBE), sales to Russia, the Mediterranean and Eastern Europe fell between 1.63 and 27.93%.

“After a valuable exchange of criteria with the private sector, a historic agreement in the following terms was reached,” it can be read in the minutes.

During the last meeting, the agreements were: unification of boxes at a $ 6.16 price per 22XU box (43 pounds); “the preferably and gradually subscription of 1-1 contracts (exporter – producer) until the end of 2016 and review of the banana regulations,” it is indicated.

Furthermore, according to the minutes of the meeting, the elimination of intermediaries and commercial agencies that are called “they” was agreed.

Government and companies pay the Christmas bonuses in a difficult year

“Imbalance” between fixed salary and the family food basket is $ 303.96