The BIESS delivered $ 914 million in mortgage loans during 2017

Housing loans granted during the past year occupied the largest portion of this category in the affiliate’s bank. On the other hand, private banks increased the placement between 2016 and 2017.

The Banco del Instituto Ecuatoriano de Seguridad Social (Biess) placed $ 914.8 million in mortgage loans last year, of which approximately $ 696 million were destined for the acquisition of housing and $ 67.7 million for the purchase of land.

The total represents a decrease of $ 180.45 million compared to 2016. However, according to Mercy Guzmán, manager of Crédito del Biess, the reduction was due to operational issues, but not due to lack of market. For this year the projection is to deliver $ 1,000 million in mortgage loans. Guzmán explained that the increase will occur thanks to new strategies such as the promotion of credit from public and private institutions to facilitate the procedures to the affiliate. 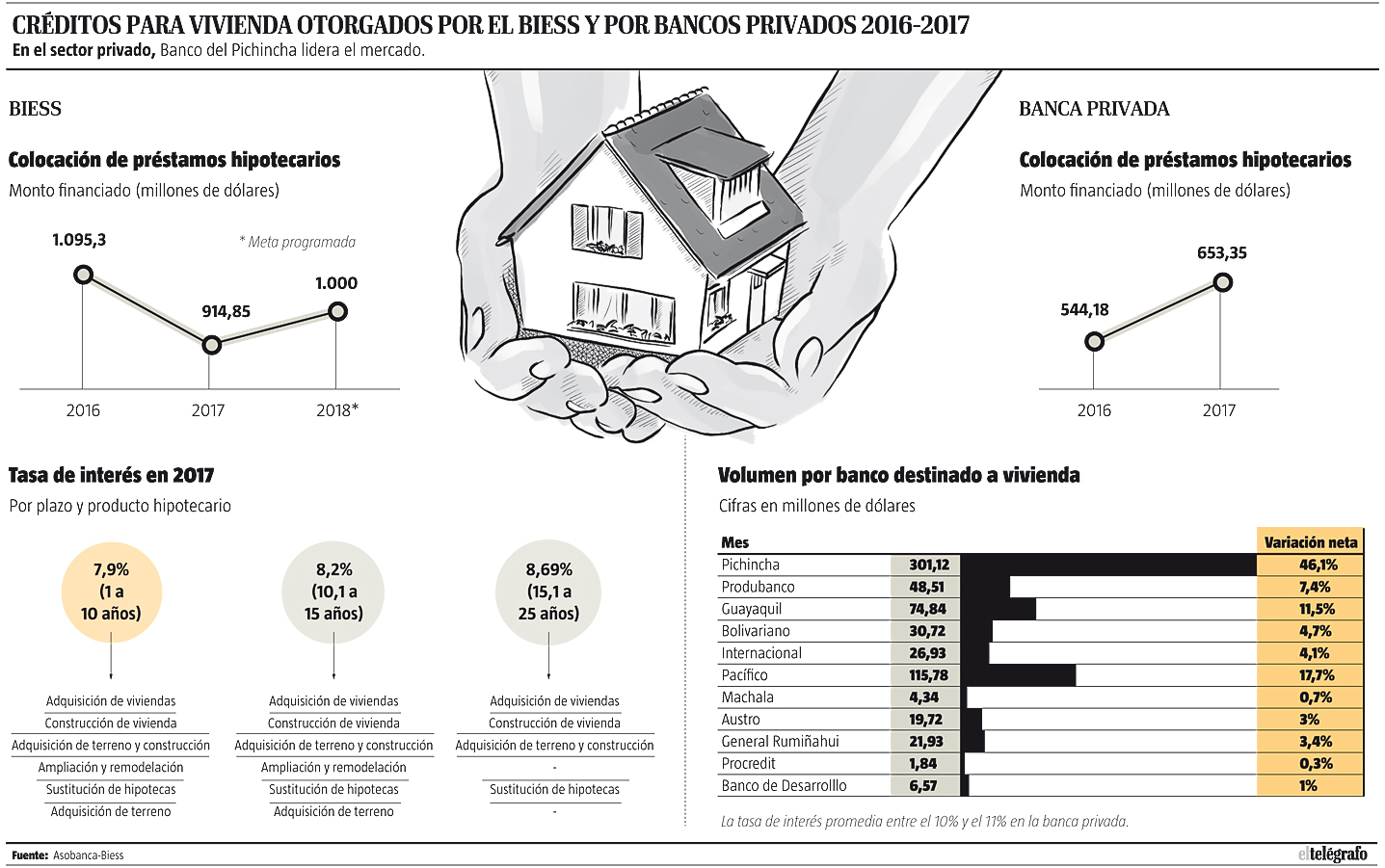 In August 2017, the Biess raised the ceiling of the loan for homes and land from $ 150,000 to $ 200,000, allowing more affiliates with a greater capacity to pay to access loans with this new amount, Guzmán explained.

From private banking, in 2017 a total of $ 21,662 million in loans were delivered, of which $ 653.35 million were for housing, according to information published by the Association of Private Banks of Ecuador.

The delivery of credits for this segment was led by Banco del Pichincha, by granting $ 301.12 million, followed by the Pacific, with $ 115.78 million, and Banco de Guayaquil, with $ 74.84 million. In terms of interest rates, both for the purchase of finished housing, such as construction, land acquisition or expansion and remodeling, the Biess manages a percentage of 7.90% in terms of one to 10 years and 8.20% if it is paid for 15 years.

The interest reaches 8.69% if the member accepts the maximum term of 25 years. In the private sector, rates vary between 10% and 11%, with terms of up to 20 years. For example, Banco del Pichincha, with a greater participation of the private market, offers for the acquisition of new or used properties loans from $ 3,000 to $ 200,000 in a term of up to 20 years. The financing is given in 70% on the commercial appraisal of the property with a rate of 10.75% per annum, adjusted quarterly and 9.99% for brand new properties.

When choosing a financial institution, the opinions of the beneficiaries are varied. For example, Susy Arce acquired a credit for $ 60,000 with the Biess for the purchase of her home, for which she pays a monthly fee of $ 629.07 with a nominal rate of 8.69% and an effective rate of 9.04%.

“We decided to do it with Biess due to several factors, among them the interest rate for housing that was more or less between 1.5 and 2 points lower than the rate of private banks. In addition they gave a payment term from 10 and maximum 15 years; here we took it out to 16 years with six months, which, although it generates interest, gave us a more manageable monthly fee, “she said.

On the other hand, Luis Padilla said he did not go to Biess to apply for a loan because he acquired a home in a project pre-approved by Banco del Pichincha. His loan was $ 56,000 with that financial institution. Monthly cancels $ 560 at a rate of 9.7%. However, he acknowledged that at the moment he is looking to migrate his debt to another bank that offers him better benefits. (I)