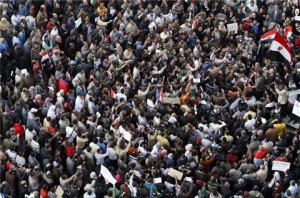 The great march of 1 million people, which was convened today to demand resignation of Hosni Mubarak from power, has already brought together 2 million people in Tahrir Square at Cairo, while in Alexandria and Suez the protests continue.

Many people have stayed at Tahrir Square since two days ago; they have armed campfires to protect themselves from cold. Millionaires in the country helped protesters by giving them money to buy water and food in order to share it with the crowd, because the idea is not to stop protests; however, the supplies in Egypt have begun to running short. It is very difficult to get milk, bread and food, this have been caused for the block of the main roads.

The curfew has been abolished three hours ago, but the Protestants insist that they will not go home until Mubarak leaves power. Families, youth, students, adults, professionals, and all the Egyptians still arriving to the square, aided by the army, who yesterday decided that they will not “use force against the people” because “the protests are legitimate.”

In the square it has been installed a giant screen showing images of the protest, in order to break the censorship of the official Egyptian press, which is not communicating what is happening in the streets; while the Egyptians are still disconnected from the world because, since Friday the government took away their mobiles and the Internet.

All the opposition, including the Muslim Brotherhood, the Islamist Great Strength, and the Egypt leader Mohamed El Baradei, has already reached an agreement: 1) Mubarak leaves the power 2) Dissolution of Parliament 3) New Constitution 4) Building a transitional government.

In addition, it will be constituted a group of experts responsible for establishing the dialogue mechanism to manage the transition, with the participation of El Baradei, Amr Musa (Secretary of the Arab League) and Ahmed Zewail (Chemistry Nobel Prize in 1999), which currently resides in the United States and has been called to participate. It is expected his arrive to Cairo this afternoon.

While the U.S and its allies are arguing about the permanence of Hosni Mubarak in Egypt and they believe that Mubarak should not be candidate in the upcoming elections.