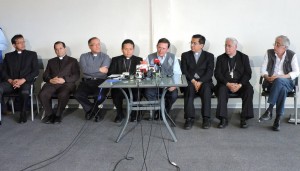 The Ecuadorian Episcopal Conference stressed in a press conference yesterday they seek to prevent the image of Pope Francisco to be politically used during his visit to the country.

EEC spokesman David de la Torre added that the Pope does not come to the country to devote any ideology and political system, but to proclaim Jesus Christ. This is not the moment to express ideas or political projects, nor stir up controversies and division.

In addition, the Episcopal Conference commented on the political situation of the country, “I do not mean a truce, but a call for dialogue, because the truce means that after the events, we will return to the same, and the important thing is that the holy Father’s visit will help us to not go back to that,” said the spokesman of the EEC.

Pope Francis will receive the keys of Guayaquil and Quito