The CNJ already has 297 applicants to renovate 7 judges 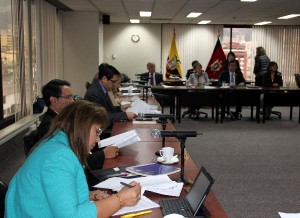 The call from the Judicial Council to renew the first third of judges (7 officers) of the National Court of Justice (CNJ for its Spanish acronym) was fulfilled, thus 297 applicants will participate in the contest to occupy the seven offices.

On next Tuesday the list of those who passed the first stage of the contest that seeks the seven new judges to the Court will be announced.

The constitutional requirements are: to be Ecuadorian and enjoy political rights, tertiary level degree and 10 years of practice as a lawyer, judicial or professor.

The submitted documents were: identity card, voting certificate, registration of Law Diploma in the Senescyt, an affidavit about notorious probity in the profession and charges, not having inabilities and current resume.

José Alomía , President of the Bar Association of Pichincha, preferred not talk about the contest because it has just begun.