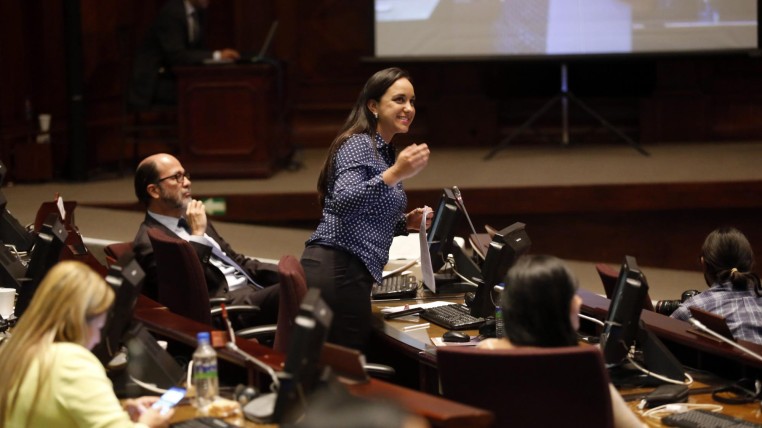 EcuadorNews
The Legislature plans to discuss a new law that regulates the Citizen Security System in a second debate. This legal document will reconcile the functioning of all security institutions with the Constitution of 2008. And gives free way for the creation of a Public Protection Service that will be in charge of the Ministry of Interior.

It will be a civil, specialized, professional and technical body in charge of the protection of the high authorities of the State and the five most important government offices.

The president of the International Sovereignty Commission of the Legislature and militant of the PAIS party Maria Augusta Calle reported that the members of this body could be exceptionally armed. The use of weapons will depend on the authorization of the Joint Command and the Law of Weapons.

The possibility that the members of the Public Protection Service use weapons in certain cases arouses the suspicion of representatives of the opposition such as Diego Salgado, who considers that “the big problem is not the creation of an armed civilian force, but an armed political force.”
Milton Castillo, a former judge of Criminal Guarantees, insists that with the approval of the Security Code, “Correa not only demonstrates fear but wants to protect himself from the power of citizens.”

In any case, the Public Protection Service is a long-term plan: it will be executed in 10 years. In the first three years, this protection group will represent an average expenditure of about $ 15,186,133 for training, maintenance, and the purchase of equipment, according to the Legislature. Only after the tenth year of existence, the average expenditure will stabilize at $ 16.461,800. The economic projection counts on the favorable opinion of the Ministry of Finance.