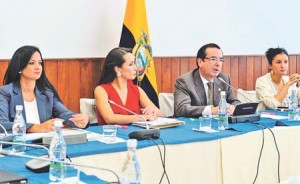 The Occasional Committee defined yesterday its agenda to study the 16 amendments to the National Constitution. It is expected that the report on the first debate of the Draft Constitutional Amendments to be approved for November 28.

This document shall be submitted to the Legislative Council of Administration (CAL) and the President of the National Assembly, Gabriela Rivadeneira, shall convene to a plenary session.

The 11 core members began yesterday to discuss the roadmap that legislators must meet and eventually decided that the package of amendments would be processed by subjects.

It was also established that for November 24 the general committees should be received and the draft report shall be communicated. On November 26 the internal debate will take place.