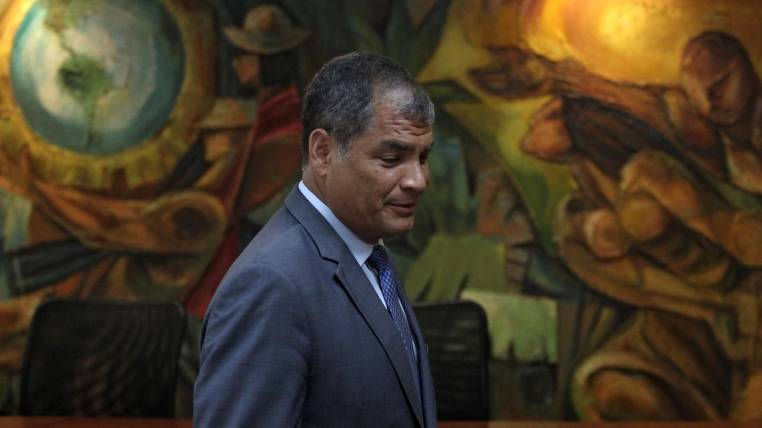 It was prohibited but, in any case, they authorized the payment of 40% of the state contribution for retirement pensions to Social Security with State bonds. That decision will cost 77.2 million dollars to the former finance ministers, Patricio Rivera and Fausto Herrera.

Yesterday, the General Comptroller notified them with the ratification of the gloss issued against them, last year. In addition, Darío Velástegui, legal coordinator of the Ministry of Finance, will have to respond in solidarity. This is the first direct sanction that is confirmed against those who were part of the economic team of former President Rafael Correa.

They are also part of the investigation for the approval and use of public debt (including Chinese loans) and oil pre-sales negotiated with Petrochina and Petrotailandia. According to the notification of the gloss, to which EXPRESO had access, Rivera, currently superintendent of Popular and Solidarity Economy, and Herrera had shared blame in the irregularities detected. On April 24, 2012, the first issued a ministerial agreement that made it possible to pay 40% of jubilee pensions with bonuses. The second authorized the disbursements in favor of the IESS.

The control entity says that the bonds, by mandate of law, should be used only to finance investment projects and “it was expressly forbidden to allocate them to permanent expenditure, within which the payment of 40% of the pensions administered by the IESS is circumscribed”.

Rivera and Herrera violated the Constitution, the Planning and Public Finance Code, as well as the Statute of the Administrative Legal Regime of the Executive Function. How is the gloss against the ex-ministers calculated? Under the modality of payment, Finance placed, between March 12, 2013 and July 15, 2014, State bonds for $ 1,272’720,435 to Social Security.

That operation generated interest for 77’232.561,18 dollars. An “economic loss” for the State, according to the Comptroller’s Office. They argued that there was no such damage because it was an operation between public entities. They also explained that the bonds were only to finance investment projects. According to them, the ministerial agreement is “legitimate and legal”. But the Comptroller did not accept any of those arguments and ratified the gloss.

Herrera told EXPRESO yesterday, in a short statement, that his lawyers will “go to other instances” to respond to the notification.

The notification with the ratification of the gloss against the former ministers was sent to the National Directorate of Collection and Coactives of the Comptroller’s Office.

This instance must arrange the issuance and collection of the 77.2 million dollars. Interest will be calculated as of June 30, 2014.

The appointed officials can still appeal the decision of the Comptroller’s Office in the justice system: they can appeal to the Administrative Contentious Court.

He was one of the supporters of former president Rafael Correa and stayed, for a few months, in the cabinet of Lenin Moreno, as a counselor. In his tenure as minister he gave way to liquidity loans from Central to the State, which reached $ 5,000 million.

After leaving the Government, in December 2016 due to health problems, he devoted himself to the free exercise of the profession. As a minister, he had a key role in negotiating the pre-sales of crude with China and Thailand. (I)

Assets have more impact on prices than food