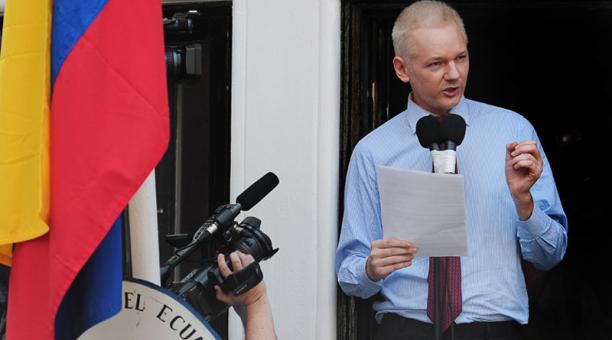 Ecuador requested “diplomatic status” for Julián Assange, founder of Wikileaks. It was confirmed by a spokesman of the Ministry of Foreign Affairs of the United Kingdom to the Guardian newspaper.

“The Government of Ecuador recently requested diplomatic status for Mr. Assange here in the United Kingdom. The United Kingdom did not grant this request, nor are we in talks with Ecuador on this matter, “said the Ministry. He added that “Ecuador knows that the way to solve this problem is for Julian Assange to leave the Embassy to face justice.”

On Tuesday, Foreign Minister María Fernanda Espinosa was consulted on this issue, in a conversation with the foreign press. And she did not deny it. She only said he would not refer to social media rumors because it’s such a sensitive issue. This is due to the comments that the Australian activist had received Ecuadorian nationality and that he was seeking a diplomatic status so that he could leave the Embassy in London. According to the website of the Civil Registry, Assange does have an Ecuadorian identification number (1729926483), which means that his address is in Pichincha.

This newspaper consulted the Civil Registry, via e-mail, which implied the condition of Assange´s ID, but until the closing of this edition there was no response. However, it was learned that the Foreign Ministry sent a letter of naturalization to that institution. The Ecuadorian Foreign Ministry issued a statement in which it did not mention the subject. Meanwhile, Assange posted a photograph of him with the Ecuadorian National team shirt on his Twitter account, without any description.

But the Foreign Ministry insisted that “it will not respond to rumors or distorted or decontextualized information about this case.” His statement makes a review of the asylum granted by Ecuador to the Australian, since August 2012 and adds that “The current Government has been responsible for finding alternatives to resolve this inherited situation, with full respect for the national legal framework, international law and rights humans”. Precisely on Tuesday, Foreign Minister Espinosa reported that the government of President Lenin Moreno seeks to establish a mediation to find a definitive solution to the situation. This could be from a third country or an international personality.

Naturalization to obtain Ecuadorian nationality can be achieved in five ways, according to the Human Mobility Law. In the case of Assange it could only be given if he provided relevant services to the country or through a naturalization letter.

In the first scenario, it is the power of the President of the Republic to grant it, at the request of a natural person, collective or social organization. The second is the competence of the Foreign Ministry and is granted to those who have resided at least three years in a row in Ecuador or those considered to be stateless.

The Australian served five years of asylum in the diplomatic headquarters in August, which is considered a national territory, according to international law. In addition, the request for a naturalization letter can be made by refugees, asylees and stateless persons, in any embassy or consulate. For which, the Ministry of Foreign Affairs defines the administrative procedure to be followed.

In addition to personal documents and the minimum period of residence in Ecuadorian territory, those over 18 must know the national symbols, state in an interview the reasons for their request and demonstrate legal means of living in the country. Because there is no decree granting nationality to Assange, it is understood that the process is being carried out through the naturalization letter. Moreno has only granted two nationalities. (I)