The current state spending was reduced by 15 percent 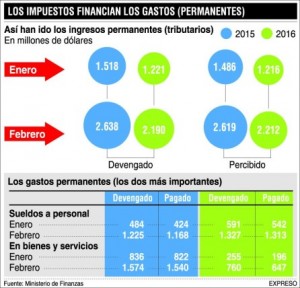 Though the State reduced its current spending by 15 percent, the cost of paying salaries grew slightly. The government cut heavily the spending of good and services, which included the import of derivate products. The cut in expenses was forced because the crude price fell, explained Jaime Carrera, the Observatory Political Prosecutor. According to the numbers provided by the Ministry of Finance, the total of current spending was 4.655 million dollars in the first two months from 2015, but it was reduced to 3.937 million dollars later in the year. The consumption of good and services also decreased from 1.400 million dollars to 1.013 millions, this past February.