The Ecuadorian Business Committee calls for transparency in corruption investigations

In a communiqué released this afternoon, the Ecuadorean Business Committee showed its support for the management of President Lenin Moreno and his call for a “promising national dialogue.”

The document, entitled “Corruption, an encumbrance for the prosperity of Ecuador,” confirms the commitment of the business sector to reactive the local economy and the promotion of transparency, referring to the allegations of corruption that the last days.

They also request three concrete actions to overcome the situation:
1. That Ecuadorian justice, particularly the Prosecutor’s Office and the National Audit Office, act with absolute independence and expeditiously to clarify any case of corruption.
2. The establishment of responsibilities within the framework of the law for any citizen who commits such crimes, regardless of the public office he holds.
3. To correct the shortcomings in control and the creation of monitoring mechanisms to prevent similar situations.
The text ends with expressions of “total support to the media” and encourages Ecuadorians to “denounce corrupt officials without fear, in the full exercise of their freedom of speech.” (I) 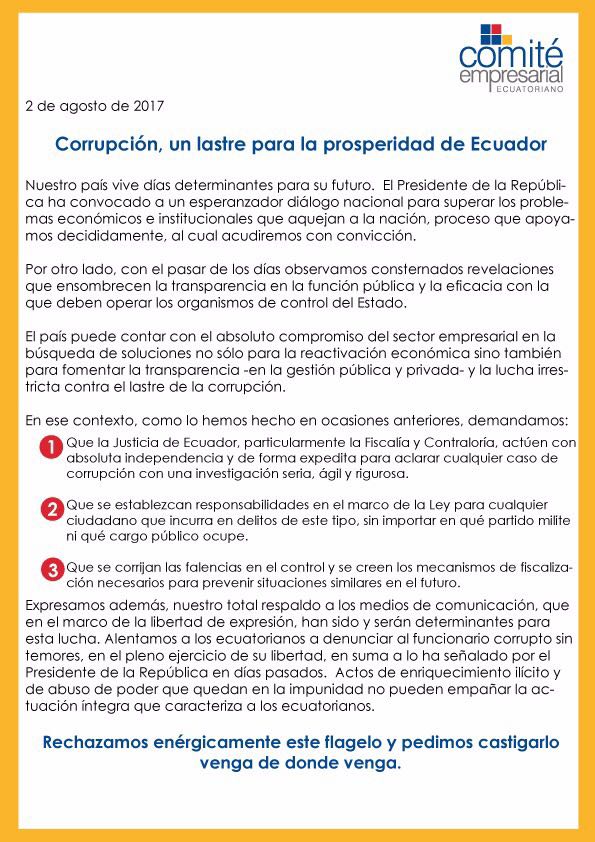