The Ecuadorian Foreign Ministry reports no problems with fumigations 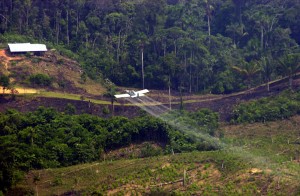 After the Colombian peasants delivered a document with their proposals to the Government of Sucumbios, they traveled to Ecuador in protest of fumigations their country make, then, they returned to their enclosures after three days of protest.

The demonstrators expect their orders reach the Ecuadorian Foreign Ministry to intervene with the government of Colombia.

However, the Ministry of Foreign Affairs has not reported inconveniences.

In earlier days, Foreign Minister Ricardo Patiño stressed that so far there are no reports that Colombia has made fumigations without informing Ecuador and without national technicians are participating and knowing about the development of these activities in advance.

He added that those who have any concerns or suspicion of an eventual arrival of glyphosate must report it to “entrust Ecuadorian technical teams to do the review”.

The Chancellor acknowledged that Colombia has complied with the agreement, even last year fumigations occurred beyond 10 kilometers.