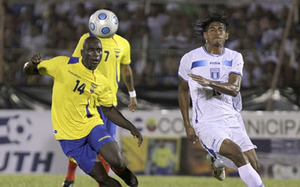 Ecuador reached a tie with Honduras

The soccer team of Ecuador tested several non-main-players to face Honduras, with which they reached a tie last night with two goals per team and which ended their tour of the U.S. which also drew with Argentina (0-0), last Friday.

Ecuador put their goalie Maximo Banguera along with the players Renato Ibarra and Fidel Martinez from the beginning of the match and during the game entered the change to Fernando Gaibor, the juvenile Ramirez, Fernando Saritama, Joa Rojas and Jeferson Montero.

Jaime Ayovi scored the first goal of the game, but with the disadvantage, Honduras took the game to Ecuador and lowered their chances with the departure of Antonio Valencia along with the entrance of the striker Carlo Costly, who added two goals that changed the score.

Finally, a good goal was made by Enner Valencia, who had a few minutes of entering and gave the final set of 2-2.