A small group of 200 farmers make a specialty coffee supported by the recent appellation of origin from the province of Loja , in southern Ecuador, which seeks to place the Andean country on the map of gourmet coffees and bid for its own niche in this competitive region. 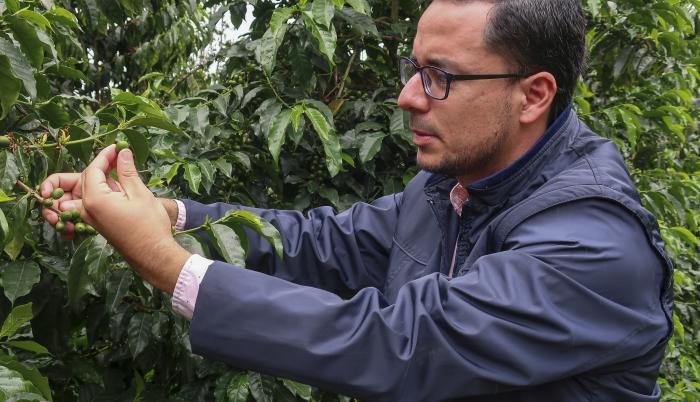 Photograph dated April 6, 2022, showing Jhon Rodríguez, professor at the Faculty of Economic and Business Sciences of the Private Technical University of Loja (UTPL) in the city of Loja (Ecuador).

“What makes Loja coffee different is its ecosystem, the Loja orchard where citrus, forest and bananas are associated, achieving a beneficial variation and turning it into an exotic product,” Manuel Romero , a coffee producer with a own processing, laboratory, factory and tasting cafeteria located in this city, considered the coffee capital of Ecuador.

At the head of a newly opened enterprise in which he makes his traditional coffee, Café Indera, known, Romero recognizes that it is difficult for Ecuador to compete with industrial giants such as Brazil and Colombia.

Its niche is different: to seduce an international market eager for that special grain that has brought high-quality Lojano coffee produced by small farmers to the reserved shelves of international chains such as Starbucks.

With an old coffee tradition, in Loja there are between 12,000 and 13,000 associated and non-associated producers, distributed in 15 of the 16 cantons that make up this province bordering Peru.

Among them, barely two hundred are part of the denomination “Lojano, Café de Origen” typical of the specialty, which requires certain regulations and has turned this Ecuadorian coffee into a select product, also exportable, that aims to conquer the palate of the most gourmets in the local and international market .

“The idea is that with the denomination of origin, producers can massify this topic of high-quality coffee,” says the producer.

This initiative has been joined by the so-called Provincial Coffee Table , an organization that articulates public and private entities, international cooperation, academia and financial entities, as well as the Cup of Excellence contest , which was held for the first time in Ecuador in 2021 and concluded with a completely lojano podium.

“As a producing country, we are not on the international map, but certain peculiarities that Loja has, such as its microclimates and bioforest resources, have caused interest to skyrocket,” warns Romero, who highlights the quality of the geisha, cider, typical improved, and villalobo varieties. or San Salvador, harvested in the province.

In the search for better grains, more efficient harvests and better production, the academy also plays a fundamental role, both in the research of plants with good genetics adapted to the Loja countryside and in the training of coffee growers and businessmen specialized in the production and grain marketing.

“Through the ‘Escuela del Cafe’ we seek to train this chain of coffee growers, producers, marketers, exporters, transfer knowledge and technify many processes,” says Jhon Rodríguez, professor at the Faculty of Economic and Business Sciences of the Technical University Particular of Loja (UTPL).

In a small greenhouse at the same university, Pablo Acosta , director of the Department of Biological and Agricultural Sciences, investigates how to mass-produce quality seedlings (seedlings) through biodegradable mesh.

“We propose the propagation of plants directly in substrates, which will grow in a friendly medium so that the roots are not twisted and the stems are vigorous,” he says, along with several coffee cuttings.

The conditions in which Loja is located, located in the range of the equatorial line, at a height of about 2,100 meters in the Andes mountain range, with the perpendicular rays of the sun and characteristic rains, finish granting that differentiation and recognition to the cafe.

On his 4.5-hectare farm where he produces about 100 quintals a year, Pablo Eguiguren produces three types of grain: natural, which is dried with the whole cherry; “honey”, which is made with the honey produced by the coffee bean itself; and the wash, from which the sugars are extracted in the fermentation process .

“Each one has different characteristics in the cup, depending on the market you are targeting,” explains this young manager of the El Aguacate farm, a third generation of coffee growers from Loja, who exports mainly to China.

The province brings together 6,000 producing farms, many of which have turned to growing specialty coffee since this coffee boom exploded a decade ago.

“The idea is to differentiate ourselves and for the world to recognize this corner of Ecuador as an exotic origin where spectacular coffees are produced,” summarizes the entrepreneur.

Ecuador climbed 14.94 points in the ranking of the most attractive countries for mining investment