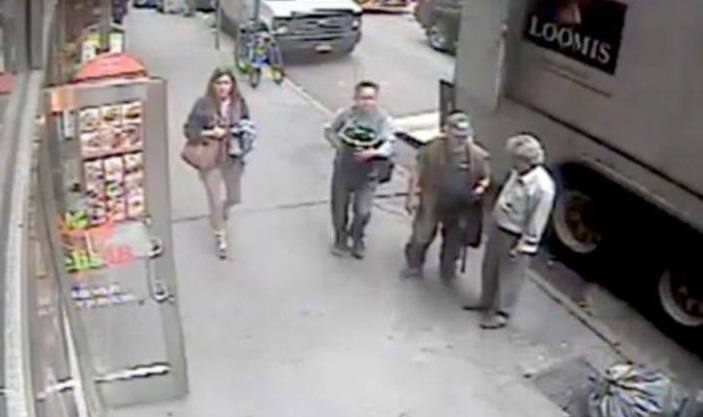 A video in December 2016 showed a thief who took advantage of an oversight and took a bucket of gold from a truck parked in downtown New York. It turned out that the he was Ecuadorian.

The bucket had two huge ingots that weighed 40 kilos of gold worth 1.6 million dollars. After fleeing to Ecuador, he was imprisoned for a few months. Now, since October, he is free and lives with his mother. The American television network NBC New York followed the track. Julio Nivelo told reporters how he committed the crime, how he was arrested and where the ingots are now.

Now he lives hidden with part of the gold. Nivelo explained to NBC that he was a veteran thief and that the one in New York was just one of the many robberies he had carried out over the years.

Shortly after arriving home with the gold ingots, having stopped every two blocks to rest, Nivelo changed it to cash and kept $ 1.2 million, which he distributed in different shoe boxes.

He hid part of the money and gave his girlfriend $ 200,000. He traveled to Florida and from there he drove to Los Angeles with approximately $ 40,000. Then he went to Mexico and crossed until finally arriving in Ecuador.

Although the thief felt safe, the local authorities caught him a month after his arrival. They refused to extradite him to the United States, but he was sent to an Ecuadorian prison to serve a nine-month sentence.

Now he is a free man who lives at home with his mother, and has not been able to get his hands on the money that brought him here.

He explained to NBC that his wife sent him $ 50,000 and she disappeared with the rest of the money. Apparently, she told him that the police had raided her house in New Jersey and confiscated all the money that was left.

However, everyone in his hometown still thinks that Nivelo, known as the “golden man” is covered in money. “They know I’m the guy who went to New York, stole the bucket and has $ 1.6 million,” Nivelo told NBC. He affirms that now he breaks his silence because he does not “have anything”. (I)