BREAKING NEWS
Ash from Sangay affected 35 cantons in six provinces
Ministry of Education defines maximum time for virtual classes, by age
DP World’s logistics center starts operations in Duran canton
Legal Secretariat of the Presidency asks for an account of the crude tariff paid to OCP
The Hague Court denies Ecuador’s request and ratifies the award in favor of Chevron
Despite having recovered, these six animals did not survive in their habitat
Ecuador totals financial relief for USD 891 million with China
Convert waste into a source of income and strengthen enterprises, among finalist ideas in Reinventa Ecuador
The Chevron case made headlines in the Netherlands
Historic: Richard Carapaz achieves his first stage podium in the Tour de France

The family keeps the trance alive due to the kidnapping 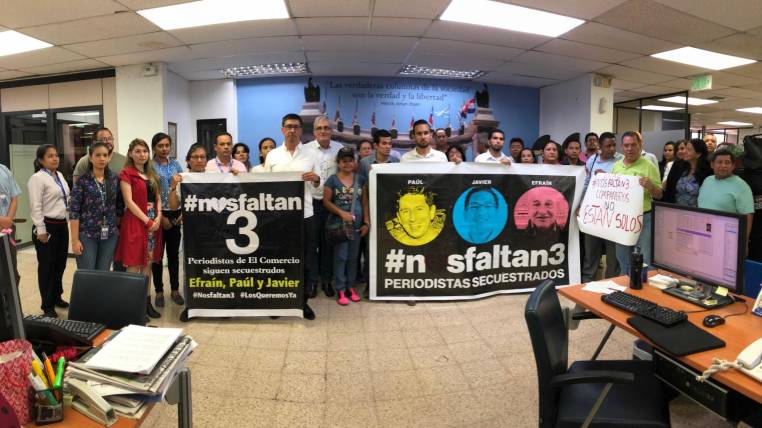 “We know that the news lasts two days and they die and that is what we want to avoid here,” said Ricardo Rivas, brother of the photographer kidnapped by an irregular armed group on the country’s northern border today 18 days ago. To avoid falling into oblivion, the relatives of the three workers of the newspaper El Comercio have not stopped calling and going every day to the street to invoke public empathy and ask for the release of Paúl Rivas (45 years old), Javier Ortega ( 32 years) and Efraín Segarra (60 years).

After the two weeks and counting, the family group has intensified its strategy. In addition to meeting this week with the president of Ecuador, Lenin Moreno, he has visited Guayaquil gathering a large group of journalists and citizens in the street and going directly to the main media, including EXPRESO, to make it more obvious if It fits your request: we must not forget. Cuenca, Santo Domingo and other cities are also on an agenda that will also take them to the Summit of the Americas to be held tomorrow and last in Lima (Peru).

The president of Fundamedios, César Ricaurte, announced yesterday in a press conference that efforts are being made so that the relatives of the three kidnapped Ecuadorians can meet with the secretary general of the OAS, Luis Almagro. The appointment with Edison Lanza, special rapporteur for Freedom of Expression of the Inter-American Commission on Human Rights, is already confirmed.

The brother of Paul Rivas, Ricardo, told EXPRESO that they are looking for and receptive to the collaboration of social or human rights organizations such as the Red Cross. However, the intervention has not yet been finalized, referring to details that could not be shared publicly. Even so, they know that it is they who must keep the issue alive as the trance of liberation continues. “We would not want this to acquire political overtones,” Rivas answered about the silence of some faces of the daily reality of the country.

Whoever does call for a public pronouncement on the matter, as a sign that the kidnapping and the liberation process is being taken seriously as a binational problem, is the president of Colombia, Juan Manuel Santos, who still does not issue a mention to the disappearance of the journalistic team.

Not even yesterday, when a statement appeared announcing the death of the three Ecuadorians after a military incursion to rescue them, the Colombian president made reference. The defense minister of the neighboring country, however, aligned with the Ecuadorian government to deny that any type of offensive has been carried out in the border area and to inform that the authenticity of the communiqué cannot be confirmed.

The president of Colombia, Juan Manuel Santos, spoke yesterday about the eight police officers killed in Bogota, but he did not say a word about the kidnapping.

Since March 26, former President Rafael Correa has not written a message in networks to support the kidnapped. Yes, he answered Moreno’s reproaches.

The mayor of Guayaquil, Jaime Nebot, stressed the importance of public opinion to put pressure on the cause, but without hindering it. And without surrendering. (I)

Judiciary Council, with more complaints before the Council of Citizen Participation and Social Control