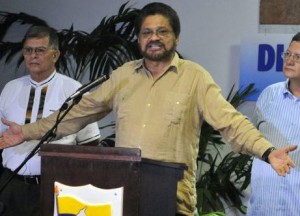 The second of the FARC, Luciano Marin.

The Government of Colombia and the FARC have reached an agreement on the point of drugs and drug trafficking, the third issue discussed at the negotiating table in Havana.

Agreements of this new item on illicit drugs include crop substitution programs, and other public health prevention and finally, a solution to the issue of drug trafficking.

The new agreement coincides with the announcement of the representatives of the FARC that the war in Colombia will be suspended eight days while the first round of the presidential election takes place.

Remain to be discuss three points related to the repair of the victims, disarmament and the manner in which agreements shall countersign, whose last word will have the Colombians.

These agreements, which are partial, will only be known in its entirety once the final agreement is signed.