The Fastest Computer in the World is Chinese 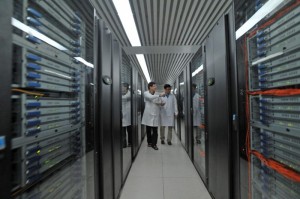 Tianhe-1—name of the supercomputer—is capable of a sustained 2.507 petaflop computing, equivalent to 2,507 billion calculations per second.
Jaguar Cray XT5, from the U.S. Department of Energy in Oak Ridge (Tennessee), topped the list in June as the fastest—1.74 petaflops per second—. If the Tian-1 is faster, China would overcome USA on the list.

Supercomputers are used for complex calculations such as weather system models, simulations of nuclear explosions and jet aircraft design. China is investing on research to join the United States, Europe and Japan in the elite of global technology.

The new MacBook Air: Lighter Than Ever