The father of the unemployed scholarship holder was a deputy minister 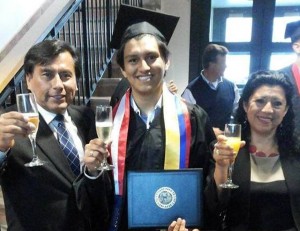 Pablo Maldonado Moreno, a scholarship holder at the University of Colorado in Boulder, USA, who during the weekly address of March 18, broadcast from Limon Indanza, told President Rafael Correa he did not find a job since he returned, is the son of Jorge Maldonado Falconi, who was deputy minister of Transport Infrastructure in 2009 and is currently an official of the Regional Health Authority in Morona.

As he has published in his Facebook page, since December 2015, Jorge Maldonado Falconi is responsible for the infrastructure, security and operational risks of 15 Health Units in the Morona county, including the Mobile Medical Unit.

Rodas says that the Government owes $ 70 million to Quito