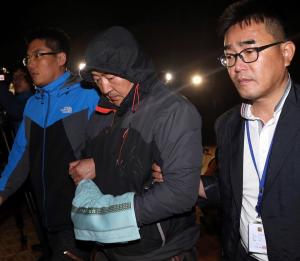 Lee Jun-seok, Captain of the sunken South Korean ship with 273 missing, most high school students, said this Saturday after being arrested by the police that he postponed the evacuation due to the adverse conditions of the sea and the absence of rescue boats. Lee faces five charges, including negligence and violation of maritime law, and he has been stopped so that he could escape or destroy evidence

His decision probably compounded the tragedy after the sinking of the ferry, since more than half of the 476 people who were on board were trapped. Only 174 were rescued alive, while 29 are the recovered bodies.

The highest authority of the boat argued that in the area where the Wednesday accident, occurred in the southwest of South Korea, the waters are cold and have waves and strong currents, so he believed that passengers would be in “serious troubles” If they fall to the sea “even with lifejackets positions”.

Both survivors and relatives of the victims have criticized the decision of the captain of delaying the evacuation order half after starting to turn the ship, considering that this decision caused many passengers trapped and prevented from saving more lives.

The captain of the Sewol was detained at dawn on Saturday along with two other members of the crew, accused of abandon ship without ensuring that the passengers were safe. The other two detainees are the third officer, of 26 years of surname Park, who allegedly piloted the boat when the accident occurred, and a helmsman of 55 years.

On the cause of the sinking of the ship, experts believe that he performed a sharp turn rather than change direction gradually.