The finest and most expensive hats in the world are made in Ecuador, portrays the BBC 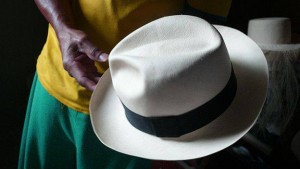 Those who do not know call them “Panama hats,” but connoisseurs know that the world’s finest straw hats come from Ecuador and cities like Montecristi and Cuenca are mentioned.

However, a few know of a small town called Pile.

Pile has a population of about 1,000 inhabitants located 10 minutes from the Pacific Ocean in the Ecuadorian province of Manabi, a land where _ _ cap straw grows, which is used to weave the hat that during the first half of the twentieth century was largely commercialized through the _ Panama canal, hence the confusion with its name.

“We make the best hats,” say Diogenes and Francisco Pilligua, octogenarian brothers who do not hesitate to swear and swear again that the talent was born in Pile and from there it went to Montecristi and then to Panama.

“They are filled with pride but we are abandoned. Hence the name of Montecristi or Panama hats. But we are the ones that make the hats. Barefoot, humbly.”

Pile streets are dirt and to get mobile signal in the city center it is necessary to approach the door of the church, a shrine where the priest of the neighboring town San Mateo celebrates the mass twice a month.

“We seek to create a precedent,” says Hernan Perez