The flowering of more than 2,000 yellow guayacanes beautify the streets of Guayaquil

There are four Guayacanes with yellow flowers that illuminate the corners on Pedro Pablo Gómez streets and Machala avenue, in the center. There, passersby, drivers and residents are happy and even take pictures with the colorful trees that surprised a few days ago with their abundant flowering. 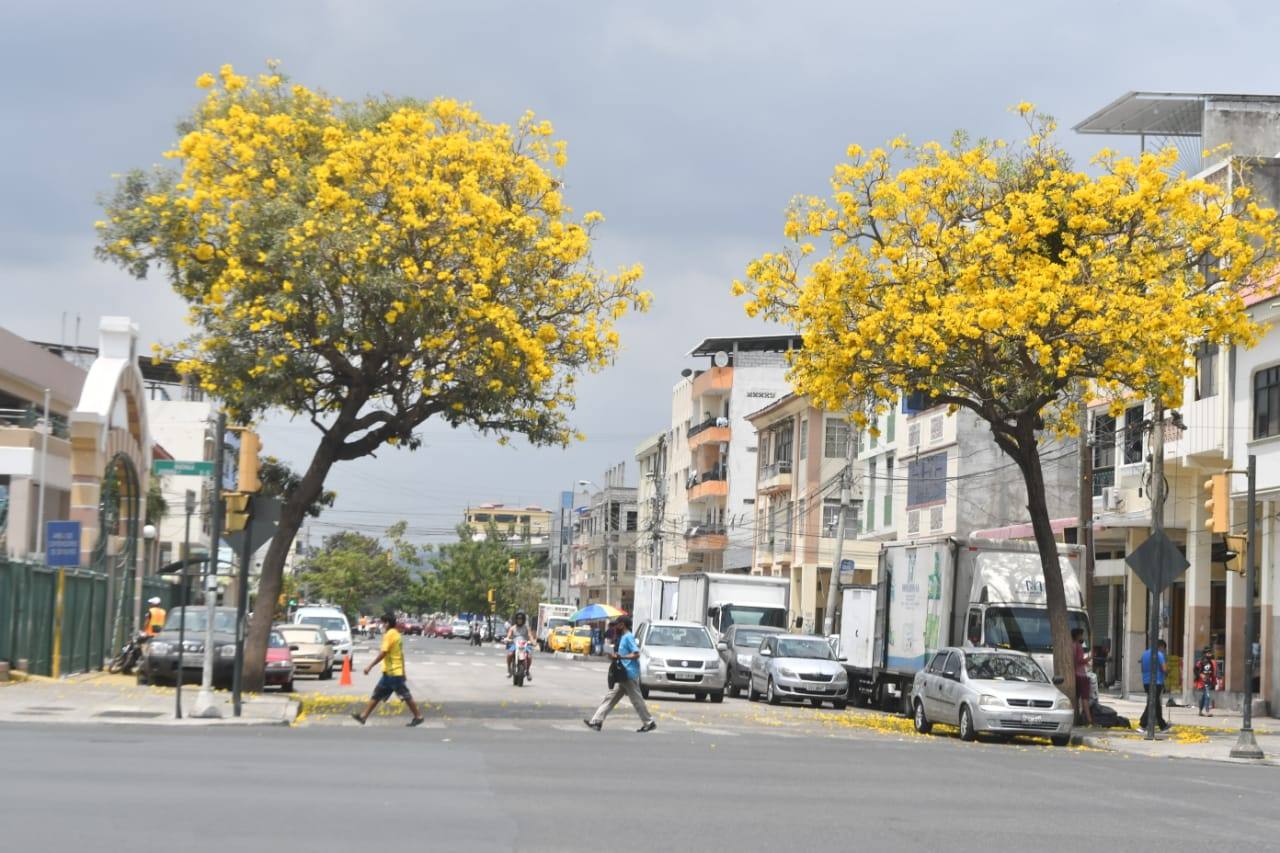 The flowering of more than 2,000 yellow guayacanes beautify the streets of Guayaquil

Andrea Fiallos, director of the La Iguana Foundation , explained that this type of guayacán is not the same as the tropical forests of Ecuador.

“The guayacán that we see in the streets is of the tabebuia aurea type, it is a Caribbean tree, native to Suriname and is considered the national tree of Venezuela. It is not the tabebuia crisanta type that is typical of Ecuador and is found in areas such as Colimes, Mangahúrco, Loja, among other places in the country, ”the expert explained.

She added that in these last two weeks, Guayaquil has adorned itself with the beauty of the “early” flowering of this and other species.

He explained that normally the flowering occurs at the beginning of December due to the change of season, but that due to global warming the climate has changed and has caused that advance.

“They are exactly one month ahead. There is an eventuality of the climate and that affects the phenology, that is the term that is used for the flowering of the trees. They bloom in December with the first showers, ”commented Fiallos.

Places to see the flowering of the Guayacanes in Guayaquil

This colorful landscape is evident in streets such as Rocafuerte, Francisco de Orellana avenues, de las Américas, the main ones of Guasmo Sur, road ears in Narcisa de Jesús and Perimetral avenues, among other sectors of urban regeneration.

Abel Pesante, director of Green Areas of the Municipality, explained that there are more than 2,000 yellow guayacanes and that this exuberant flowering was one of the characteristics to include them in the landscape designs of the city, in addition to improving the quality of life with greater oxygenation, carbon dioxide capture and temperature regulator

Julián Pérez Correa, ecologist and research professor at the Espiritu Santo University of Specialties (UEES) , explained that the constant irrigation that is given to trees and plants in the city also affects this advance of flowering.

“In the dry season these trees lose their leaves. They are asleep, then when the season changes, the plants begin to activate and bloom because the rains are approaching. That is why we see that the plants bloom from Colimes to the south because the El Niño current comes from the north, from Colombia ”, explained Pérez, who added that oaks, Fernán Sánchez and other species can also be observed.

Fiallos added that this type of guayacán has been cultivated a lot in our country and in other countries. “It is very beautiful and it is a quite manageable, adaptable, ornamental tree. It has a nice glass when posed correctly, ”he said.

He added that among the differences with the endemic, the growth time stands out, the endemic guayacán takes about fifteen years to grow, while the one introduced is five years, so it has been used as an ornamental. “It takes time to grow because it is timber, its wood is the best in the world; on the other hand, the urban one does not ”, he explained.

She said that another characteristic is the stem, that our guayacán has black wood and the other is lighter, which has been obscured by the smog of the city. Another point to compare are the flowers, some oval and in other ways.

In the streets you can see yellow carpets of the fall of flowers of the urban Guayacanes in the last days. (I)