The former terrorist group Alfaro Vive Carajo, will seek a space in the elections of 2017 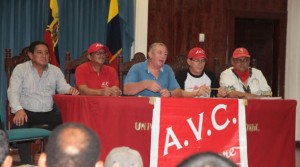 The top leaders of the organization intend to participate in the elections of 2017 “to finalize what the current government has not fulfilled.” They refer to an urban, an agrarian and other productive reform.

Until August 2016, the leaders plan to obtain 174,000 signatures to participate in the upcoming elections. However, the activity of collecting signatures has not started and they do not rule out supporting the current government, as they have done so far.

On Sunday November 15, 2015 they met in Guayaquil, where they seek the adherence of young people to the project. There were new faces like Jennifer Mieles, a young activist.

Other figures present were Ruben Ramirez, who shared a cell with the former leader of AVC, Arturo Jarrin, in the former prison García Moreno. Ramirez says that currently the organization retains its identity under the left tendency.