According to the Executive, the demonstrations led by Conaie reached 44 events during the first 12 hours and total some 3,800 people. 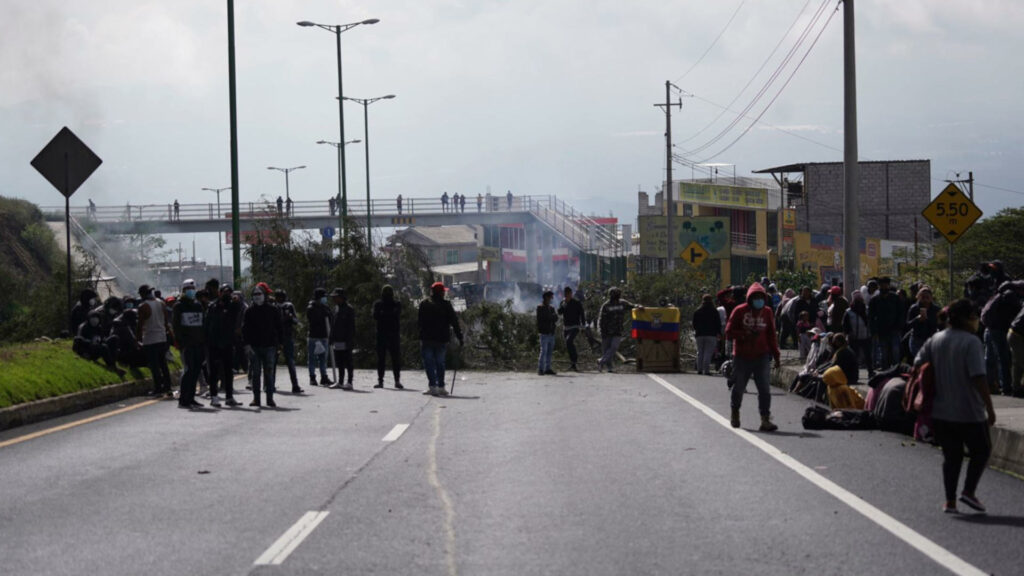 Demonstrations on the outskirts of Quito, San Miguel del Comun sector, on June 13, 2022.

Despite the calls for dialogue and the supposed openness of all the actors, the social sectors and the government of President Guillermo Lasso continue to clash and with no points of consensus in sight.

The mobilizations called by the Conaie and supported mainly by the Feine, the Fenocin and the Popular Front unions have caused the closure of several roads in different provinces of the country , since the early hours of this Monday, June 13, 2022.

The government has deployed police operations to clear the roads, under the warning of legal consequences for the paralysis of public services .

In the first government report , the authorities reported that there are some 3,800 people demonstrating and that the mobilizations are concentrated in Imbabura, Cotopaxi and Pichincha . In addition, the Collas – Oyacoto road is the only one that remains closed.

The oil fields and, in general, the rest of the hydrocarbon infrastructure have military protection. Petroecuador reported that until 1:00 p.m. oil and hydrocarbon operations were developing normally.

The Government Minister, Francisco Jiménez, said that the situation remains “absolutely under control” until noon. And that the number of protesters has been “substantially lower” than expected.

The official affirmed that the government remains open to dialogue, but “we cannot stop in the process of economic reactivation.”

90% of the roads are clear , said Minister Jiménez. “Our contingent has remained on alert and we will continue to do so throughout the day and in the days to come.”

According to the Government Minister, “many of the social demands are already being met”. He gave as an example that gasoline has not risen in six months and that loans are being granted at 1% interest. But he accepted that “everything cannot be solved in a year”.

The Minister of the Interior, Patricio Carrillo, took stock of the first twelve hours of protest, called “by a minority.” He said that there have been 44 events in the country and that in few of them there were acts of vandalism , which have been overcome.

The official said that they have found cases of people in a drunken state who cut down trees to burn them and reported the destruction of a patrol car. But they have not wanted to act in flagrante delicto so that the government is not described as repressive .

Although he warned that they collect information against “the vandals.” In case of criminal infractions, the documentation will be transferred to the Public Prosecutor’s Office .

“Everyone knows where the Palace is,” said Minister Jiménez, who maintained that the government will receive social leaders if they seek dialogue. Despite the fact that the indigenous organizations, mainly, criticize that after the previous meetings there has been no response from the Executive.

The indigenous movement also made its morning report on the progress of the national strike, which they ratify is peaceful. The cut until 10:00 reported mobilizations in 12 provinces :

The indigenous leadership also confirmed that there have been no arrests, but they did denounce an act of repression in the La Toglla commune of the Kitukara people , on the Intervalles road in Quito.

“Here nobody has gone out to do vandalism,” said the president of the Conaie, Leonidas Iza, and asked the Minister of the Interior to “stop installing lies” about the mobilizations. In addition, he asked the government not to take the dialogue “as a mockery.”

In the morning, at 11:22, before the pronouncement of the Executive, the indigenous movement delivered a document to the Presidency with the 10 proposals for which the demonstrations began.