The government bids Sopladora and CNT to investors from Europe 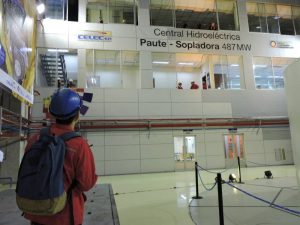 The Government bid to European investors the granting of the Sopladora hydroelectric plant and a strategic partnership with the National Telecommunications Corporation (CNT for its Spanish acronym).

This was confirmed yesterday by coordinator minister of strategic sectors Rafael Poveda, who said he had participated in two meetings with businessmen both in Paris and in Madrid, where they promoted these strategic assets.

According to the official, there was a “great interest” by several European companies in these projects at the forums.
He explained that meetings with “first class” companies that have participated in other countries in the region and the world were held, and these can ensure that the projects “will be operated or managed by the best hands,” if the negotiations are carried out (I).
Source: http://www.eluniverso.com/noticias/2016/09/20/nota/5811577/gobierno-sale-ofertar-sopladora-cnt-inversionistas-europa

Germany is the EU country that buys more to Ecuador