In an interview with PRIMICIAS, the Minister of Energy, Xavier Vera-Grunauer, explains that the negotiation of the extension of the contract in Block 16, located in Yasuní, in the Ecuadorian Amazon, is a priority. 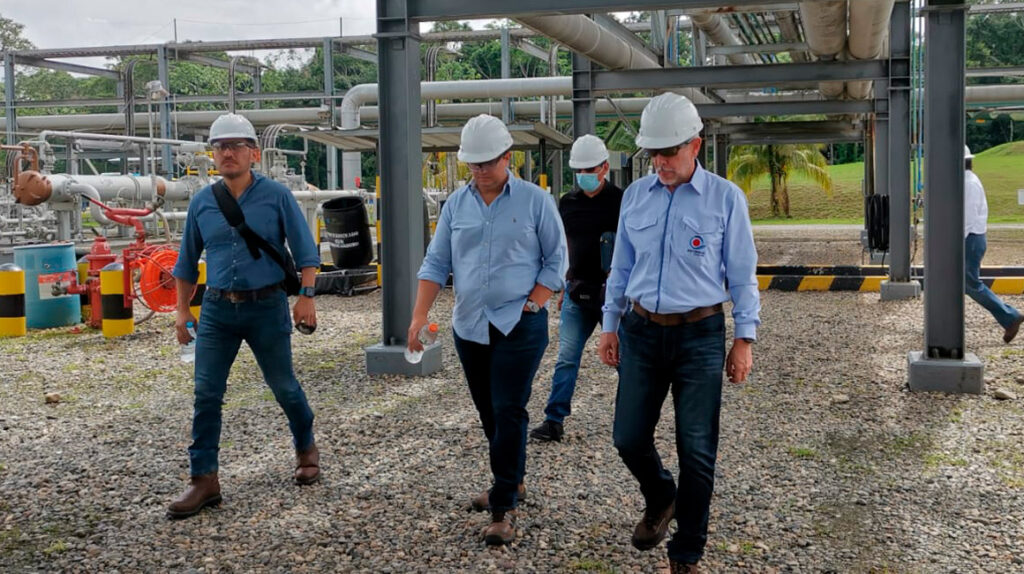 Tour of the Minister of Energy, Xavier Vera-Grunauer (left), through block 16, located in the Yasuní National Park, in the Ecuadorian Amazon.

The Supervisory Commission of the National Assembly investigates an alleged damage to the State in the oil contracts signed by the government of Rafael Correa with the French oil services giant Schlumberger .

The Ministry of Energy expects to know if these two contracts were executed in compliance with the law.

The actions were taken after the Glass Code portal published videos and audios in which José Luis Cortázar, then director of the Hydrocarbon Regulation and Control Agency (ARCH), questions the real production costs established in those contracts.

The then Vice President of the Republic, Jorge Glas, today sentenced for crimes of corruption, apparently asks Cortázar not to audit those contracts.

But the current energy minister says he has asked for legal reports on how both contracts were awarded. And he does not rule out requesting audits from ARCH itself .

The official also gives details about the current renegotiation of contracts with private oil companies operating in Ecuador.

What is the production cost per barrel at Shushufindi?

I don’t have that information at hand right now, but I do have the rates. To calculate the rate for the Shushufindi field, the following formula is applied: a discount of USD 2.19 per barrel on a value resulting from multiplying the average monthly price of WTI by a factor of 0.49.

But the value may not be less than a rate of USD 19.50 per barrel when the average price of WTI is equal to or less than USD 44 per barrel.

And it will not be able to exceed USD 29.85 per barrel when the average spot price of WTI is greater than USD 65 per barrel.

What is the rate per barrel in Auca?

In the Auca oil field, the following rates were established:

Are they high rates considering that Petroecuador’s average cost of production is USD 16.94 per barrel?

There are complaints in this regard. Precisely, we will check with the Legal Department to see if the award process and the contract are in accordance with the Law.

If everything was attached to the Law, there is nothing to do. But if we find indications to the contrary, we will take action.

Actions will depend on what we find.

Will you request an audit of the contract from the Regulation and Control Agency?

The revisions will be made from all public institutions. If the Regulation and Control Agency has an impact on the issue, it will also be asked to verify the contracts.

Will they review the rates of the oil fields where Schlumberger is located?

It is necessary to see how the contracts are, to check if they allow an eventual adjustment to the planned rates. We will always respect legal certainty.

The Government called on private oil companies to voluntarily renegotiate their contracts. Will Schlumberger accept?

I need to review the information to see if Schlumberger has requested a renegotiation of their contract.

How is the renegotiation of the contracts with the rest of the companies progressing?

The oil block 16 contract, which is operated by Petrolia, a subsidiary of Canada’s New Stratus Energy (NSE), is a priority, since it expires in December 2022.

Petrolia requests an extension of 15 or 20 more years of its contract. What steps must be followed for its renegotiation?

First they have to send the financial statements and technical reports to the Ministry of Energy.

Once that happens, the Hydrocarbons Bidding Committee (COLH) will evaluate the information and determine if it meets the conditions for the Ministry of Energy to proceed to sign a new contract.

This eventual contract will no longer be for specific services, where a fee is paid, but for participation, where the private company participates in a percentage of oil production and delivers the rest to the State.

The COLH will be formed the following week (second week of June, ndr) and will be made up of a team of professionals. The Committee will hold regular conversations with the company, as part of the renegotiation process.

How is the renegotiation going with the rest of the oil companies that want to change their service provision contracts for participation contracts?

Of the 41 companies that currently have a service provision contract, 23 are interested in migrating from the service contract to a participation contract.

Dialogues will also begin with them, but for now the priority issue is block 16. Plan A is to expand the contract in this oil area.

Plan A is to extend the contract in block 16.

And what is plan B?

If it doesn’t materialize, the field goes to Petroecuador because we can’t stop producing any day. And, we will launch a public and international tender to find a company to operate the block.

Why is the best option for the Government to extend the contract with Petrolia?

They propose to invest USD 1,200 million to support the development of blocks ITT and 31, with the construction of an oil pipeline that connects the three fields so that ITT oil can be processed in the facilities that block 16 has today.

In addition, they propose to build an electrical connection line and develop new oil wells. It is a very interesting project. Investments could start in 2022.

Why doesn’t the promised increase in oil production take off?

One of the problems that we are solving is the provision of electrical energy, which today is not stable and causes cuts (and drops in production, ndr).

To solve this inconvenience, we will sign an agreement between Petroecuador and the state Electric Corporation of Ecuador (Celec) so that they take responsibility and are in charge of delivering electricity to the fields, in a reliable way.

With this scenario, is the goal of increasing a volume of 100,000 barrels of oil per day to national production, which is currently around 498,000 barrels, realistic until December 2022?

In addition, Petroecuador launched a tender for the reconditioning of 100 mature wells and the capture of associated gas, which today is burned in burners, in addition to other projects.