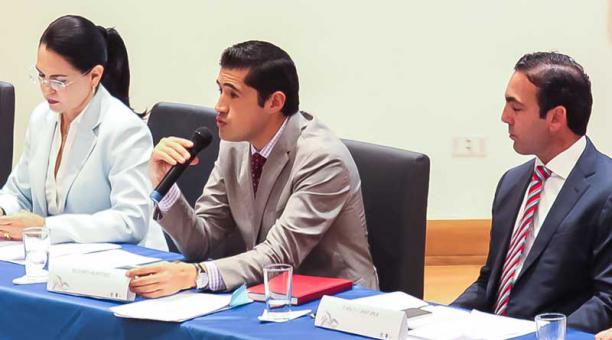 The Government set a goal to reach 2021 with the healthy accounts: zero fiscal deficit. To achieve this, Finance will have to make adjustments to public spending during the next three years. The instruments to achieve this goal are in the urgent economic bill presented by the Executive on May 24 to the Assembly.

Yesterday, in an event that brought together the authorities of the economic and productive front, Richard Martinez, Minister of Finance, said that because the public debt exceeded the ceiling of 40% of GDP, allowed by law, it will be necessary to first apply a plan of fiscal stabilization.

The public debt added up to April of this year is 48% of GDP, that is, it exceeds the legal limit. The fiscal balance plan consists of reducing primary spending (does not include the payment of interest on public debt) during the next three years until the primary deficit reaches zero. The primary deficit is the difference between income and expenses without taking into account the financial cost of the debt.

While this fiscal balance is achieved, the 40% ceiling established as the legal limit will not be taken into account. Martinez said the adjustment to spending will be one point of GDP per year, but added that President Lenin Moreno must still validate the figure.

According to the Pro approved form for 2018, the primary deficit is USD 1,568 million. For Mauricio Pozo, former finance minister, because of the size of the fiscal gap, it is prudent to begin with an adjustment of primary spending. “Doing it with discipline will allow us to get closer to multilaterals in better conditions.”

After this stage, the bill proposes rules to achieve fiscal sustainability, strengthen finances and reduce debt to reach a weight of 40% of GDP. In this phase the budget must reach a surplus.

Once the debt has returned to the limit allowed by law, it will not be possible to approve budgets with primary deficit, according to the proposal. The document also proposes that in this stage, the surpluses from the exploitation of non-renewable resources are destined to a savings fund. In the tax field, the reform proposes more than 15 incentives.

These include the exemption for 10 years from the income tax for new investments in prioritized sectors such as metalworking, pharmaceuticals, tourism, etc., except in Quito and Guayaquil where the benefit is of 8 years. In the tourism sector, the benefit is conditional upon the approval of the plan by the Ministry of the sector. Today the incentive is five years. The services of construction of housing of social interest will have a 0% VAT rate.

For natural persons there are benefits such as 0% VAT rate for LED lamps, all kinds of electric cars (for public transport and light), among others. Martinez explained that the Treasury will not receive extra income for the reform, which should be dealt with in 30 days at the Assembly.

With the reform the Government proposes for the third time in the last decade a remission of 100% of interest, fines and surcharges of tax, fiscal and customs debts. It has also been considered the exemption of interest from vehicular taxes, surcharges for not paying vehicular registration and traffic infractions, all with expiration on April 2 of this year.

Adjustments to the income tax

The bill also proposes reduction of tax benefits. The Government proposes to impose an Income Tax on the thirteenth and fourteenth remuneration for persons whose total income from economic activities is equal to or greater than USD 100 000.

For this segment, the deduction of personal expenses for the declaration is also eliminated of the tribute. Taxpayers can currently deduct five items: education (including art and culture), housing, health, food and clothing.

The maximum amount to be deducted this year was USD 14 677.

Restriction to the Central Bank of Ecuador

Limits are set, it is forbidden, these instruments will no longer be used, “said yesterday (Monday, May 28, 2018) the entity’s manager, Verónica Artola. In addition, the bill specifies that short-term paper (maturing in less than 360 days and called Cetes) do not count as debt only if the money is used for the fiscal year’s expense.

The legal initiative establishes changes in the payment of royalties for the exploitation of metallic minerals at large and medium scale. The mining concessionaire, as well as the beneficiation plants, will no longer pay an equivalent royalty of no less than 5%, but will be a percentage between 5% and 8%, on the sale of the main mineral and secondary minerals.

The tariff will be established in a regulation, according to criteria of progressivity, production volumes and price of minerals. It also proposes to eliminate the payment of 70% of the tax on extra income or ‘windfall tax’, which was approved in 2013.

The reform package also proposes changes to fix the State’s participation when oil prices rise in the participation contracts, where the operation of the field is in charge and risk of the private company.

In this type of agreements the firm operates the field and gives the State a part of the extracted oil. Although it exists in the Law, Ecuador abandoned this contract in 2010 after describing it as harmful.

Now, the Government proposes to improve the distribution of surpluses when the price of crude oil rises in these contracts: it will be proportional to the price increase and the state benefit in no case less than 50%. (I)