The transition has been taking place silently since 2020, but the effect generated by complying with the order of European buyers, to lower the chemical load in the banana production process, is beginning to generate concern in this sector. In some cases, it has become difficult to replace certain products to combat certain pests; in others, the alternatives offered by the market are expensive and not as efficient. 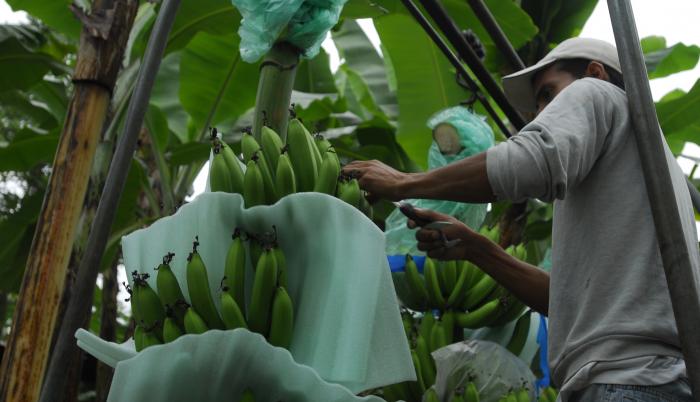 There are products that have an effect on various pests, which when applied to the bow ties that protect the banana, release the chemical causing the insects to die and fall.

The European Union (EU) has been demanding the main banana supplying countries for a couple of years to eliminate or reduce the maximum limits of chemical residues that they normally apply to control the incidence of certain diseases that attack the fruit. For its use, it has established deadlines that begin to govern, once the inventories are exhausted. Thus, products such as chlorotalovil, chlorpyrifos and dichtrin that have normally served to stop the appearance of cochineal, thrips and the fearsome black sigatoka, have entered the prohibited list.

The situation is beginning to raise alarms, due to the difficulty that farmers are having in replacing a dozen chemicals that have been banned with more ecological ones. “Sigatoka is one of the diseases with the highest incidence in banana cultivation, if it is not controlled, the fruit cannot be cut because it runs the risk of ripening in transit,” explains Víctor Hugo Quimí, a technician specialized in bananas, who clarifies that, in this case, “it is not that there are no other molecules that can substitute chlorotalovil, but that the alternatives that exist are not economical”. The substitute offer, he adds, is forcing an increase in fumigation cycles, which undoubtedly increases production costs.

However, he says, the biggest concern is thrips and cochineal, for these evils, says the expert, the market is still looking for alternatives. There are farmers who are trying organic products right now, but still without results.

An experiment that, according to Franklin Torres, president of the National Federation of Banana Producers, is forcing to incur additional costs. “I give you an example. They have asked us to eliminate the bow tie with clophiriphos that we use to attack thrips, the cochineal that damage the quality of the musaceae, but this change is costing us up to 70% more. The thousand covers that used to cost $98 are now up to $168”, he says.

As the EU has argued, the policy responds to a change in consumption that seeks to safeguard human health. Torres replies that this measure “is perfect”, but as long as the costs are honest, and the farmer is allowed to have a fair price for each box of bananas. “In Ecuador, banana growers have been selling the fruit for the last two years below the minimum support price ($6.25) and, what is worse, below production costs.”

From the export sector they recognize the seriousness of the problem, “that is why we are having an active participation in parliament, we are communicating the sustainable way in how we manage production, we are asking for times and above all scientific details for this transition… the clophiriphos to Despite being considered non-genotoxic by studies, it was banned with a decision that many believe was political ,” says José Antonio Hidalgo, director of the Association of Banana Exporters of Ecuador (AEBE).

The risk of all this, explains Hidalgo, is the final impact that this can have on productivity. It is not only the high costs of substitute organic products that are of concern, to which not everyone has access, but also their ineffectiveness.

“The prohibition of these molecules is forcing the use of others that are not as efficient and that can lower production levels.”

AEBE does not fail to note this prohibition of chemicals, as one of the factors that would have already affected the low shipments of the fruit last year. “In 2020, we sold 388 million boxes, for 2021, the closing projection is 375 million, that’s 3.4 less,” says the leader.

The call to the bloc of European countries is to make the measure more flexible or, in turn, to extend its hand to the sector so that it can join the green pact that is so much loved. “If it is verified that there is a substitute that has been developed globally with the same effectiveness and if at the cost level, they are willing to assume them, that they maintain this requirement.”

For Hidalgo, this change must demand a shared responsibility. The Ecuadorian banana industry, he says, is respectful of foreign policies and is willing to follow the trend that it wants to set, “but with the proper scientific support, with the proper economic coherence, because if it costs me more and they want to pay less, I don’t there is coherence”, he assures.

The idea of ​​adjusting to the requirements of the international market, in terms of reducing the chemical load of bananas, is not so far-fetched for producers like Milton Chichande, as long as the alternatives used leave acceptable profits.

With more than 20 years dedicated to banana production in the Mariscal Sucre parish, in the Milagro canton, Chichande made the difficult decision to start experimenting with organic products in March of last year, when he was at risk of losing the plantation as a result of the sigatoka and its lack of resources to combat it. His five-hectare farm was considered by a transnational company as part of a pilot plan that seeks to produce organic bananas, without much chemicals, as required by the European Union. “We have already done ten application cycles with the new products and so far, they are giving good results.”

With the application of the organic system, the use of fungicides and the traditional bowtie, which is nothing more than a plastic sheet loaded with chemicals that is placed between the banana bunches to avoid pests such as cochineal, remains in the past. Now, this is controlled with fumigations to the environment, to the stem and without touching the fruit. “For this, potassium salts and soaps are used, which makes the procedure cheaper,” Chichande acknowledged.

The transition from traditional to organic began 10 months ago. Now the expectation is to see that the numbers play in his favor. That is, the investment amount is equal to or less than earnings. Chichande has a weekly production of 45 to 50 boxes of bananas per hectare and an average of 2,400 to 2,600 per year. His goal now is to produce a minimum of 3,000 boxes per hectare per year. ML