The Economic Development Commission of the National Assembly approved this Monday, April 27, the report for the first debate on the Humanitarian Support Law, which, according to the legislators, has 80% changes compared to the proposal sent by the Executive in mid of this month. 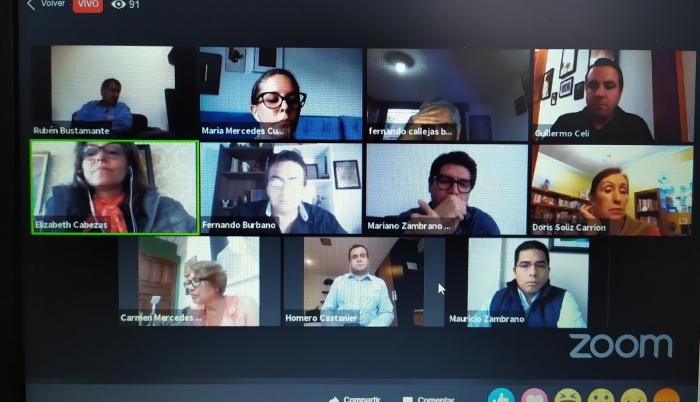 The document was analyzed in a virtual way during the weekend and continued until Monday afternoon and evening. The Commission received nearly a hundred appearances from government authorities and other political and social actors .

These included, for example, that the contribution of natural persons be from those who earn $ 720 , a proposal that came from the Unitary Front of Workers (FUT), and not from the $ 500 as the Executive proposed in its project. .

In addition, that the contributions for both private and public workers are governed by a table, because they consider that it is unconstitutional to lower 10% of the salary to state employees who earn more than a thousand dollars, as proposed by the Government.

Another idea that the legislators included , and that was not in the document sent by President Lenín Moreno , is that the electricity sector authorities order the 10% reduction in the cost of electricity service during March, April and May.

Lawmakers like Guillermo Celi (SUMA) and Doris Soliz of the Citizen Revolution hoped that the reduction would be greater. There was even talk of 30%, but the president of the Commission, Esteban Albornoz, said that this could bring an imbalance in the operation of the electricity companies .

Another point that was clarified in the last hours was the mechanism through which employees and employers must reach agreements on working hours and remuneration. The majority were inclined to make any agreement between the parties be made collectively and not individually.

The Commission determined that the resources that reach the special account be used solely and exclusively to finance health projects , directly finance people in a state of vulnerability, or reinforce actions to sustain employment and production.

But other issues generated unrest. In the morning, the Commission approved that all the actors that are in the first line of combat against the coronavirus are exempt from submitting their contribution to face the post-pandemic, that is, Health personnel, police and the military .

However, at night a motion by Assemblyman Fernando Callejas , of CREO, limited this benefit to workers in the Health sector and left the uniformed officers out . This made Celi and the social Christian César Rohon uncomfortable, who considered it a discriminatory and incomprehensible measure , because they had already voted early in favor.

Other legislators criticized that proposals such as recording the capital found in tax havens , the country’s largest fortunes and achieving a greater contribution from companies have not been included. The vote was eight in favor of the report , compared to five abstentions.

Aware that some errors and omissions may have been made, Albornoz said that all observations may be submitted in the coming days, as this is a first document. The approved report will be delivered this April 28, 2020 to the President of the Assembly, César Litardo, for the first debate in which the regulations could vary .