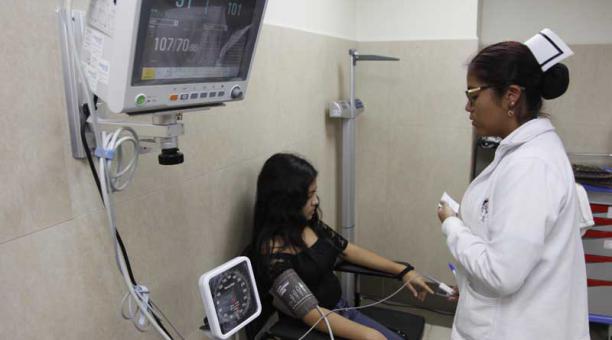 The Ecuadorian Institute of Social Security (IESS) gives health coverage to two population groups without the proper financing: to children under 18 years of age and of retirees.

Only in 2017, the Ecuadorian Social Security Institute assisted two million minors. María Elena Valencia, wife of an IESS affiliate, has an 8-year-old son diagnosed with Duchenne muscular dystrophy, a degenerative disease. He is attended every three or six months by a specialist from the Carlos Andrade Marín Hospital, in Quito.

These represent 4 million people, a number greater than that of active affiliates; that is, the 3.6 million that do pay a premium. But the expansion of the beneficiary population was approved without economic compensation, explained the social security expert, Carmen Corral. The cost of care for children of members and retirees in 2017 was USD 170.15 million, according to IESS data.

This situation has aggravated the state of the Health Fund, which for this year does not have enough income to cover the expenses. Social Security this year needs USD 3 475 million to pay for the medical care of the covered population, but it will only have USD 2 230 million for contributions from the members, according to the entity’s Budget.

Corral recalls that the Social Security Law, in its article 117, provides that Health Insurance must be financed with “a mandatory contribution of up to 10% on the subject matter of the member (…) and with other sources of financing determined in this law.” But it has not been fulfilled.

The Board of Directors of IESS increased, in 2015, the contribution of affiliates for health from 5.71% to 9.94%. But the contribution is reduced every year, and since 2021 it will be 5.16%, despite the fact that health expenses increase year after year. For Prof. Marco Proaño, this increase, which was made at the expense of removing contributions to pension and occupational risk insurance, is explained by the problems generated by the extension of benefits to minors.

Experts agree that these attentions cannot be suppressed because it would be a regression of rights. For Corral, an alternative is for members to contribute to this group of beneficiaries or raise the contribution of members with minor children. Another option is to create a kind of collective insurance for these attentions.

There are two other population groups whose medical care has a financing mechanism, but which is not met or is not sufficient. In the first one, there are the family heads affiliated to the Rural Social Security, together with all the relatives who live under their dependence.

For Ilvia Espinosa, 89 years old and the wife of a member of this insurance, accessing care in the IESS is essential. She has regular consultations in the specialties of cardiology, pulmonology, endocrinology and dermatology. “This solidary regime is unique on an international scale. It must be preserved. But you have to guarantee its financing, “said Corral.

However, this insurance is in deficit. For 2017, expenditures were USD 242 million, but only had revenues of USD 178 million. The outlook is not different for this year, when the deficit will be USD 196.4 million, according to the 2018 Budget of the entity. To cover the difference, the IESS expects a transfer from the State and disinvest. Finally, the IESS provides medical care to retirees and people with catastrophic illnesses, charged to the State’s contribution as established by law, but the Treasury has not paid since 2001. Until June, the debt amounted to USD 2,880 million.

On the health situation, the IESS responded that since 2015 it has applied several administrative measures to optimize resources, such as the fight against corruption, generate more infrastructures and reduce referrals to private clinics. He also said that he is working on a new law “that reflects the current situation of Ecuadorian social security.” (I)